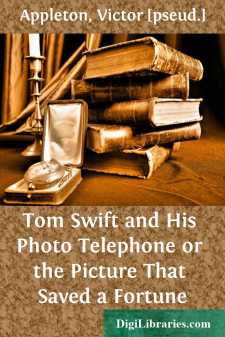 Chapter I A Man On The Roof

Tom Swift looked over at his father, who was seated in an easy chair in the library. The elderly gentleman--his hair was quite white now--slowly shook his head, as he murmured again:

"It can't be done, Tom! It can't be done! I admit that you've made a lot of wonderful things--things I never dreamed of--but this is too much. To transmit pictures over a telephone wire, so that persons cannot only see to whom they are talking, as well as hear them--well, to be frank with you, Tom, I should be sorry to see you waste your time trying to invent such a thing."

"I don't agree with you. Not only do I think it can be done, but I'm going to do it. In fact, I've already started on it. As for wasting my time, well, I haven't anything in particular to do, now that my giant cannon has been perfected, so I might as well be working on my new photo telephone instead of sitting around idle."

"Yes, Tom, I agree with you there," said Mr. Swift. "Sitting around idle isn't good for anyone--man or boy, young or old. So don't think I'm finding fault because you're busy."

"It's only that I don't want to see you throw away your efforts, only to be disappointed in the end. It can't be done, Tom, it can't be done," and the aged inventor shook his head in pitying doubt.

Tom only smiled confidently, and went on:

"Well, Dad, all you'll have to do will be to wait and see. It isn't going to be easy--I grant that. In fact, I've run up against more snags, the little way I've gone so far, than I like to admit. But I'm going to stick at it, and before this year is out I'll guarantee, Father, that you can be at one end of the telephone wire, talking to me, at the other, and I'll see you and you'll see me--if not as plainly as we see each other now, at least plainly enough to make sure of each other."

Mr. Swift chuckled silently, gradually breaking into a louder laugh. Instead of being angry, Tom only regarded his father with an indulgent smile, and continued:

"Well, Tom, I'm not exactly laughing at you--it's more at the idea than anything else. The idea of talking over a wire and, at the same time, having light waves, as well as electrical waves passing on the same conductor!"

"All right, Dad, go ahead and laugh. I don't mind," said Tom, good-naturedly. "Folks laughed at Bell, when he said he could send a human voice over a copper spring; but Bell went ahead and to-day we can talk over a thousand miles by wire. That was the telephone."

"Folks laughed at Morse when he said he could send a message over the wire. He let 'em laugh, but we have the telegraph. Folks laughed at Edison, when he said he could take the human voice--or any other sound--and fix it on a wax cylinder or a hard-rubber plate--but he did it, and we have the phonograph. And folks laughed at Santos Dumont, at the Wrights, and at all the other fellows, who said they could take a heavier-than-air machine, and skim above the clouds like a bird; but we do it--I've done it--you've done it."