Tom Swift and His Electric Rifle; or, Daring Adventures in Elephant Land 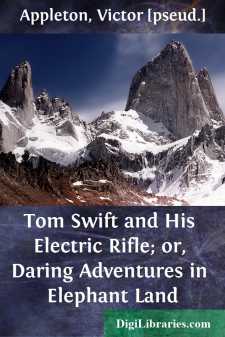 “Have you anything special to do to-night, Ned?” asked Tom Swift, the well-known inventor, as he paused in front of his chum’s window, in the Shopton National Bank.

“No, nothing in particular,” replied the bank clerk, as he stacked up some bundles of bills. “Why do you ask?”

“I wanted you to come over to the house for a while.”

“Going to have a surprise party, or something like that?”

“No, only I’ve got something I’d like to show you.”

“Well, not exactly new. You’ve seen it before, but not since I’ve improved it. I’m speaking of my new electric rifle. I’ve got it ready to try, now, and I’d like to see what you think of it. There’s a rifle range over at the house, and we can practice some shooting, if you haven’t anything else to do.”

“I haven’t, and I’ll be glad to come. What are you doing in the bank, anyhow; putting away more of your wealth, Tom?”

“Yes, I just made a little deposit. It’s some money I got from the government for the patents on my sky racer, and I’m salting it down here until Dad and I can think of a better investment.”

“Good idea. Bring us all the money you can,” and the bank clerk, who held a small amount of stock in the financial institution, laughed, his chum joining in with him.

“Well, then. I’ll expect you over this evening,” went on the youthful inventor, as he turned to leave the bank.

“Yes, I’ll be there. Say, Tom, have you heard the latest about Andy Foger?”

“No, I haven’t heard much since he left town right after I beat him in the aeroplane race at Eagle Park.”

“Well, he’s out of town all right, and I guess for a long time this trip. He’s gone to Europe.”

“To Europe, eh? Well, he threatened to go there after he failed to beat me in the race, but I thought he was only bluffing.”

“Well, I, for one, am glad of it. Did he take his aeroplane along?”

“Yes, that’s what he went for. It seems that this Mr. Landbacher, the German who really invented it, and built it with money which Mr. Foger supplied, has an idea he can interest the German or some other European government in the machine. Andy wanted to go along with him, and as Mr. Foger financed the scheme, I guess he thought it would be a good thing to have some one represent him. So Andy’s gone.”

“Then he won’t bother me. Well, I must get along. I’ll expect you over to-night,” and with a wave of his hand Tom Swift hurried from the bank.

The young inventor jumped into his electric runabout which stood outside the institution, and was about to start off when he saw a newsboy selling papers which had just come in from New York, on the morning train.

“Here, Jack, give me a TIMES,” called Tom to the lad, and he tossed the newsboy a nickel. Then, after glancing at the front page, and noting the headings, Tom started off his speedy car, in which, on one occasion, he had made a great run, against time....