Tom Swift and His Electric Locomotive, or, Two Miles a Minute on the Rails 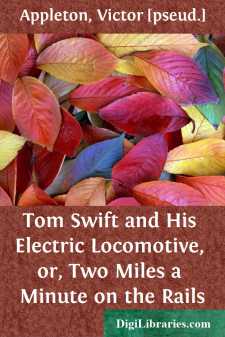 Chapter I A Tempting Offer

"An electric locomotive that can make two miles a minute over a properly ballasted roadbed might not be an impossibility," said Mr. Barton Swift ruminatively. "It is one of those things that are coming," and he flashed his son, Tom Swift, a knowing smile. It had been a topic of conversation between them before the visitor from the West had been seated before the library fire and had sampled one of the elder Swift's good cigars.

"It is not only a future possibility," said the latter gentleman, shrugging his shoulders. "As far as the Hendrickton and Pas Alos Railroad Company goes, a two mile a minute gait—not alone on a level track but through the Pas Alos Range—is an immediate necessity. It's got to be done now, or our stock will be selling on the curb for about two cents a share."

"You do not mean just that, do you, Mr. Bartholomew?" asked Tom Swift earnestly, and staring at the big-little man before the fire.

Mr. Richard Bartholomew was just that—a "big-little man." In the railroad world, both in construction and management, he had made an enviable name for himself.

He had actually built up the Hendrickton and Pas Alos from a narrow-gauge, "jerkwater" road into a part of a great cross-continent system that tapped a wonderfully rich territory on both sides of the Pas Alos Range.

For some years the H. & P. A. had a monopoly of that territory. Now, as Mr. Bartholomew intimated, it was threatened with such rivalry from another railroad and other capitalists, that the H. & P. A. was being looked upon in the financial market as a shaky investment.

"You do not mean just that, do you, Mr. Bartholomew?"

Mr. Bartholomew, who was a little man physically, rolled around in his chair to face the young fellow more directly. His own eyes sparkled in the firelight. His olive face was flushed.

"That is much nearer the truth, young man," he said, somewhat harshly because of his suppressed emotion, "than I want people at large to suspect. As I have told your father, I came here to put all my cards on the table; but I expect the Swift Construction Company to take anything I may say as said in confidence."

"We quite understand that, Mr. Bartholomew," said the elder Swift, softly. "You can speak freely. Whether we do business or not, these walls are soundproof, and Tom and I can forget, or remember, as we wish. Of course if we take up any work for you, we must confide to a certain extent in our close associates and trusted mechanics."

"Humph!" grunted the visitor, turning restlessly again in his chair. Then he said: "I agree as the necessity of that last statement; but I can only hope that these walls are soundproof."

"What's that?" demanded Tom, rather sharply. He was a bright looking young fellow with an alert air and a rather humorous smile. His father was a semi-invalid; but Tom possessed all the mental vigor and muscular energy that a young man should have. He had not neglected his Athletic development while he made the best use of his mental powers....