Tom Swift and His Big Tunnel, or, the Hidden City of the Andes 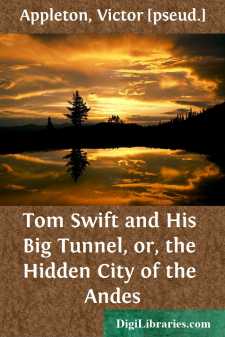 Chapter I An Appeal for Aid

Tom Swift, seated in his laboratory engaged in trying to solve a puzzling question that had arisen over one of his inventions, was startled by a loud knock on the door. So emphatic, in fact, was the summons that the door trembled, and Tom started to his feet in some alarm.

"Hello there!" he cried. "Don't break the door, Koku!" and then he laughed. "No one but my giant would knock like that," he said to himself. "He never does seem able to do things gently. But I wonder why he is knocking. I told him to get the engine out of the airship, and Eradicate said he'd be around to answer the telephone and bell. I wonder if anything has happened?"

Tom shoved back his chair, pushed aside the mass of papers over which he had been puzzling, and strode to the door. Flinging it open he confronted a veritable giant of a man, nearly eight feet tall, and big in proportion. The giant, Koku, for that was his name, smiled in a good-natured way, reminding one of an overgrown boy.

"Hear you, Koku? Say, I couldn't hear anything else!" exclaimed Tom. "Did you think you had to arouse the whole neighborhood just to let me know you were at the door? Jove! I thought you'd have it off the hinges."

"If me break, me fix," said Koku, who, from his appearance and from his imperfect command of English, was evidently a foreigner.

"Yes, I know you can fix lots of things, Koku," Tom went on, kindly enough. "But you musn't forget what enormous strength you have. That's the reason I sent you to take the engine out of the airship. You can lift it without using the chain hoist, and I can't get the chain hoist fast unless I remove all the superstructure. I don't want to do that. Did you get the engine out?"

"Not quite. Almost, Master."

"Then why are you here? Has anything gone wrong?"

"No, everything all right, Master. But man come to machine shop and say he must have talk with you. I no let him come past the gate, but I say I come and call you."

"That's right, Koku. Don't let any strangers past the gate. But why didn't Eradicate come and call me. He isn't doing anything, is he? Unless, indeed, he has gone to feed his mule, Boomerang."

"Eradicate, he come to call you, but that black man no good!" and Koku chuckled so heartily that he shook the floor of the office.

"What's the matter with Eradicate?" asked Tom, somewhat anxiously. "I hope you and he haven't had another row?" Eradicate had served Tom and his father long before Koku, the giant, had been brought back from one of the young inventor's many strange trips, and ever since then there had been a jealous rivalry between the twain as to who should best serve Tom.

"No trouble, Master," said Koku. "Eradicate he start to come and tell you strange man want to have talk, but Eradicate he no come fast enough. So I pick him up, and I set him down by gate to stand on guard, and I come to tell you. Koku come quick!"

"Oh, I knew it must be something like that!" exclaimed Tom in some vexation....