Tom Swift and His Air Scout, or, Uncle Sam's Mastery of the Sky 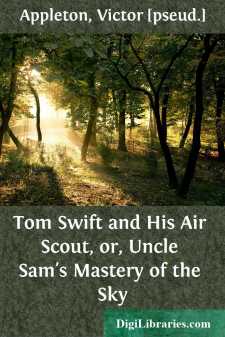 CHAPTER I A SKY RIDE

A young lady—an exceedingly pretty young lady, she could be called—stood with one small, gloved hand on the outstretched wing of an aeroplane, and looked up at a young man, attired in a leather, fur-lined suit, who sat in the cockpit of the machine just above her.

"Safe, Mary?" repeated the pilot, as he reached in under the hood of the craft to make sure about one of the controls. "Why, you ought to know by this time that I wouldn't go up if it wasn't safe!"

"Oh, yes, I know, Tom. It may be all right for you, but I've never been up in this kind of airship before, and I want to know if it's safe for me."

The young man leaned over the edge of the padded cockpit, and clasped in his rather grimy hand the neatly gloved one of the young lady. And though the glove was new, and fitted the hand perfectly, there was no attempt to withdraw it. Instead, the young lady seemed to be very glad indeed that her hand was in such safe keeping.

"Mary!" exclaimed the young man, "if it wasn't safe—as safe as a church—I wouldn't dream of taking you up!" and at the mention of "church" Mary Nestor blushed just the least bit. Or perhaps it was that the prospective excitement of the moment caused the blood to surge into her cheeks. Have it as you will.

"Come, Mary! you're not going to back out the last minute, are you?" asked Tom Swift. "Everything is all right. I've made a trial flight, and you've seen me come down as safely as a bird. You promised to go up with me. I won't go very high if you don't like it, but my experience has been that, once you're off the ground, it doesn't make any difference how high you go. You'll find it very fascinating. So skip along to the house, and Mrs. Baggert will help you get into your togs."

"Shall I have to wear all those things—such as you have on?" asked Mary, blushing again.

"Well, you'll be more comfortable in a fur-lined leather suit," asserted Tom. "And if it does make you look like an Eskimo, why I'm sure it will be very becoming. Not that you don't look nice now," he hastened to assure Miss Nestor, "but an aviation suit will be very—well, fetching, I should say."

"That'll do! That'll do!" laughed the young aviator. "One joke like that is enough in a morning. It was pretty good, though. Now go on in and tog up."

"Positive! Trot along now. I want to fix a wire and—"

"Oh, is anything broken?" and the girl, who had started away from the aeroplane, turned back again.

"No, not broken. It's only a little auxiliary dingus I put on to make it easier to read the barograph, but I think I'll go back to the old system. Nothing to do with flying at all, except to tell how high up one is."

"That's just what I don't care to know, Tom," said Mary Nestor, with a smile. "If I could imagine I was sailing along only about ten feet in the air I wouldn't mind so much."

"Flying at that height would be the worst sort of danger....