Tom Swift and His Air Glider, or Seeking the Platinum Treasure 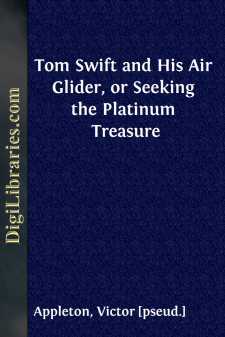 CHAPTER I A BREAKDOWN

"Why, Ned Newton, you're not getting afraid; are you? And after you've been on so many trips with me?"

"No, it isn't exactly that, Tom. I'd go in a minute if you didn't have this new fangled thing on your airship. But how do you know how it's going to work—or whether it will work at all? We may come a cropper."

"Bless my insurance policy!" exclaimed a man who was standing near the two lads who were conversing. "You'd better keep near the ground, Tom."

"Oh, that's all right, Mr. Damon," answered Tom Swift. "There isn't any more danger than there ever was, but I guess Ned is nervous since our trip to the underground city of gold."

"I am not!" indignantly exclaimed the other lad, with a look at the young inventor. "But you know yourself, Tom, that putting this new propeller on your airship, changing the wing tips, and re-gearing the motor has made an altogether different sort of a craft of it. You, yourself, said it wasn't as reliable as before, even though it does go faster."

"Now look here, Ned!" burst out Tom. "That was last week that I said it wasn't reliable. It is now, for I've tried it out several times, and yet, when I ask you to take a trip with me, to act as ballast—"

"Is that all you want me for, Tom, to act as ballast? Then you'd better take a bag of sand—or Mr. Damon here!"

"Me? I guess not! Bless my diamond ring! My wife hasn't forgiven me for going off on that last trip with you, Tom, and I'm not going to take any more right away. But I don't blame Ned—"

"Say, look here!" cried Tom, a little out of patience, "you know me better than that, Ned. Of course you're more than ballast—I want you to help me manage the craft since I made the changes on her. Now if you don't want to come, why say so, and I'll get Eradicate. I don't believe he'll be afraid, even if he—"

"Hold on dar now, Massa Tom!" exclaimed an aged colored man, who was an all around helper at the Swift homestead, "was yo' referencin' t' me when yo' spoke?"

"Yes, Rad, I was saying that if Ned wouldn't go up in the airship with me you would."

"Well, of all things!" gasped Tom. "I believe you're all afraid of the old airship, just because I made some changes in her. I'll go up alone, that's what I will."

"No, I'll go with you," interposed Ned Newton who was Tom's most particular chum. "I only wanted to be sure it was all right, that was all."

"Well, if you've fully made up your mind," went on the young inventor, a little mollified, "lend me a hand to get her in shape for a run....