Tom Swift and His Aerial Warship, or, the Naval Terror of the Seas 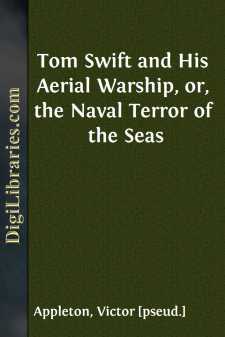 CHAPTER I TOM IS PUZZLED

"What's the matter, Tom? You look rather blue!"

"Blue! Say, Ned, I'd turn red, green, yellow, or any other color of the rainbow, if I thought it would help matters any."

Ned Newton, the chum and companion of Tom Swift, gave vent to a whistle of surprise, as he gazed at the young fellow sitting opposite him, near a bench covered with strange-looking tools and machinery, while blueprints and drawings were scattered about.

Ranged on the sides of the room were models of many queer craft, most of them flying machines of one sort or another, while through the open door that led into a large shed could be seen the outlines of a speedy monoplane.

"As bad as that, eh, Tom?" went on Ned. "I thought something was up when I first came in, but, if you'll excuse a second mention of the color scheme, I should say it was blue—decidedly blue. You look as though you had lost your last friend, and I want to assure you that if you do feel that way, it's dead wrong. There's myself, for one, and I'm sure Mr. Damon—"

"Bless my gasoline tank!" exclaimed Tom, with a laugh, in imitation of the gentleman Ned Newton had mentioned, "I know that! I'm not worrying over the loss of any friends."

"And there are Eradicate, and Koku, the giant, just to mention a couple of others," went on Ned, with a smile.

"Well, what is it then? Here I go and get a half-holiday off from the bank, and just at the busiest time, too, to come and see you, and I find you in a brown study, looking as blue as indigo, and maybe you're all yellow inside from a bilious attack, for all I know."

"Quite a combination of colors," admitted Tom. "But it isn't what you think. It's just that I'm puzzled, Ned."

"Puzzled?" and Ned raised his eyebrows to indicate how surprised he was that anything should puzzle his friend.

"Has anything gone wrong?" Ned asked. "No one is trying to take any of your pet inventions away from you, is there?"

"No, not exactly that, though it is about one of my inventions I am puzzled. I guess I haven't shown you my very latest; have I, Ned?"

"Well, I don't know, Tom. Time was when I could keep track of you and your inventions, but that was in your early days, when you started with a motorcycle and were glad enough to have a motorboat. But, since you've taken to aerial navigation and submarine work, not to mention one or two other lines of activity, I give up. I don't know where to look next, Tom, for something new."

"Well, this isn't so very new," went on the young inventor, for Tom Swift had designed and patented many new machines of the air, earth and water. "I'm just trying to work out some new problems in aerial navigation, Ned," he went on.

"I thought there weren't any more," spoke Ned, soberly enough.

"Come, now, none of that!" exclaimed Tom, with a laugh. "Why, the surface of aerial navigation has only been scratched. The science is far from being understood, or even made safe, not to say perfected, as water and land travel have been....