Tom Swift Among the Fire Fighters, or, Battling with Flames from the Air 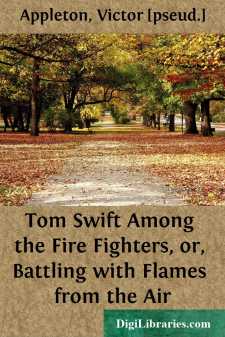 CHAPTER I A BAD PLACE FOR A FIRE

"Impossible, Ned! It can't be as much as that!"

"Well, you can prove the additions yourself, Tom, on one of the adding machines. I've been over 'em twice, and get the same result each time. There are the figures. They say figures don't lie, though it doesn't follow that the opposite is true, for those who do not stick closely to the truth do, sometimes, figure. But there you have it; your financial statement for the year," and Ned Newton, business manager for Tom Swift, the talented young inventor, shoved a mass of papers across the table to his friend and chum, as well as employer.

"It doesn't seem possible, Ned, that we have made as much as that this past year. And this, as I understand it, doesn't include what was taken from the wreck of the Pandora?"

Tom Swift looked questioningly at Ned Newton, who shook his head in answer.

"You really didn't get anything to speak of out of your undersea search, Tom," replied the young financial manager, "so I didn't include it. But there's enough without that."

"I should say so!" exclaimed Tom. "Whew!" he whistled, "I didn't think I was worth that much."

"Well, you've earned it, every cent, with the inventions of yourself and your father."

"And I might add that we wouldn't have half we earn if it wasn't for the shrewd way you look after us, Ned," said Tom, with a warm smile at his friend. "I appreciate the way you manage our affairs; for, though I have had some pretty good luck with my searchlight, wizard camera, war tank and other contraptions, I never would have been able to save any of the money they brought in if it hadn't been for you."

But Tom did not say what he had started to. He broke off suddenly, and seemed to be listening to some sound outside the room of his home where he and his financial and business manager were going over the year's statement and accounting.

Ned, too, in spite of the fact that he had been busy going over figures, adding up long columns, checking statements, and giving the results to Tom, had been aware, in the last five minutes, of an ever-growing tumult in the street. At first it had been no more than the passage along the thoroughfare of an unusual number of pedestrians. Ned had accounted for it at first by the theory that some moving picture theater had finished the first performance and the people were hurrying home.

But after he had finished his financial labors and had handed Tom the first of a series of statements to look over, the young financial expert began to realize that there was no moving picture house near Tom's home. Consequently the passing throngs could not be accounted for in that way.

Yet the tumult of feet grew in the highway outside. Ned had begun to wonder if there had been an attempted burglary, a fight, or something like that, calling for police action, which had gathered an unusual throng that warm, spring evening....