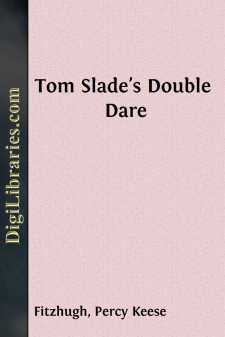 THE LIGHT GOES OUT

If it were not for the very remarkable part played by the scouts in this strange business, perhaps it would have been just as well if the whole matter had been allowed to die when the newspaper excitement subsided. Singularly enough, that part of the curious drama which unfolded itself at Temple Camp is the very part which was never material for glaring headlines.

The main occurrence is familiar enough to the inhabitants of the neighborhood about the scout camp, but the sequel has never been told, for scouts do not seek notoriety, and the quiet woodland community in its sequestered hills is as remote from the turmoil and gossip of the world as if it were located at the North Pole.

But I know the story of Aaron Harlowe from beginning to end, and the part that Tom Slade played in it, and all the latter history of Goliath, as they called him. And I purpose to set all these matters down for your entertainment, for I think that first and last they make a pretty good camp-fire yarn.

For a week it had been raining at Temple Camp, and the ground was soggy from the continuous downpour. The thatched roofs of the more primitive type of cabins looked bedrabbled, like the hair of a bather emerging from the lake, and the more substantial shelters were crowded with the overflow from these and from tents deserted by troops and patrols that had been almost drowned out.

The grub boards out under the elm trees had been removed to the main pavilion. The diving springboard was submerged by the swollen lake, the rowboats rocked logily, half full of water, and the woods across the lake looked weird and dim through the incessant stream of rain, rain, rain.

The spring which supplied the camp and for years had been content to bubble in its modest abode among the rocks, burst forth from its shady and sequestered prison and came tumbling, roaring down out of the woods, like some boisterous marauder, and rushed headlong into the lake.

Being no respecter of persons, the invader swept straight through the cabin of the Silver Fox Patrol, and the Silver Fox Patrol took up their belongings and went over to the pavilion where they sat along the deep veranda with others, their chairs tilted back, watching the gloomy scene across the lake.

"This is good weather for the race," said Roy Blakeley.

"The human race. No sooner said than stung. It's good weather to study monotony."

"Right the first time," Roy responded. "There's only one thing you don't like about meals and that's the time between them."

"What are we going to do for two hours, waiting for supper?" a scout asked.

"Search me," said Roy; "tell riddles, I guess. If we had some ham we'd have some ham and eggs, if we only had some eggs. We should worry. It's going to rain for forty-eight hours and three months more. That's what that scout from Walla-Walla told me."

"That's a dickens of a name for a city," said Westy Martin of Roy's patrol.