Tom Slade with the Colors 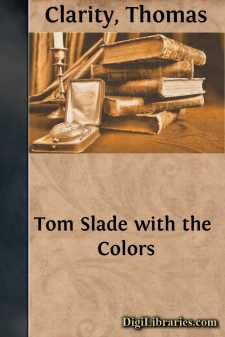 Tom Slade hoisted up his trousers, tightened his belt, and lounged against the railing outside the troop room, listening dutifully but rather sullenly to his scoutmaster.

"A little tiny one—about as big as Pee-wee," added Roy.

"A little bigger than that, I'm afraid," laughed Mr. Ellsworth, glancing at Pee-wee, who was adjusting his belt axe preparatory to beginning his perilous journey homeward through the wilds of Main Street.

"Just a little patience," repeated the scoutmaster, rapping Tom pleasantly on the shoulder.

"Don't be like the day nursery," put in Roy. "All their trouble is caused by having very little patients."

"Eighteen candle power," retorted Roy. "I ought to have ground glass to dim the glare, hey?"

The special scout meeting, called to make final preparations for the momentous morrow, had just closed; the other scouts had gone off to their several homes, and these three—Tom Slade, Roy Blakeley and Walter Harris (alias Pee-wee)—were lingering on the sidewalk outside the troop room for a few parting words with "our beloved scoutmaster," as Roy facetiously called Mr. Ellsworth.

As they talked, the light in the windows disappeared, for "Dinky," the church sexton, was in a hurry to get around to Matty's stationery store to complete his humdrum but patriotic duty of throwing up a wooden railing to keep the throng in line in the morning.

"The screw driver is mightier than the sword, hey, Dink?" called the irrepressible Roy, as Dinky hurried away into the darkness.

"All I wanted to say, Tom," said Mr. Ellsworth soberly, "is just this: let me do your thinking for you—even your patriotic thinking—for the time being. Do you get me? Don't run off and do anything foolish."

"Is it foolish to fight for your country?" asked Tom doggedly.

"You won't see them drowned by submarines as long as you stay here, Tomasso," said Roy mischievously. He loved to make game of Tom's clumsy speech.

"You know what I mean," said Tom; "I ain't going to be a slacker for anybody."

"You might as well say that President Wilson is a slacker because he doesn't go off and enlist in some regiment," said Mr. Ellsworth; "or that Papa Joffre is a coward because he doesn't waste his time with a rifle in the trenches."

"Gee whiz, you can't say he's a coward," exclaimed Pee-wee, "because I saw him!"

"Of course, that proves he isn't a coward," said Roy slyly.

"There's going to be work, and a whole lot of it, for every one to do, Tom," continued Mr. Ellsworth pleasantly. "There is going to be work for old men and young men, for women and girls and boys—and scouts. And being a slacker consists in not doing the work which you ought to do. If a girl has a flower bed where she might grow tomatoes, and she grows roses there instead, you might call her a slacker.

"The officials in Washington who have this tremendous burden on their shoulders have told us what we, as scouts (Mr....