Tom Slade with the Boys Over There 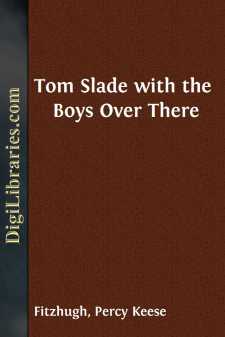 THE HOME IN ALSACE

In the southwestern corner of the domains of Kaiser Bill, in a fair district to which he has no more right than a highwayman has to his victim's wallet, there is a quaint old house built of gray stone and covered with a clinging vine.

In the good old days when Alsace was a part of France the old house stood there and was the scene of joy and plenty. In these evil days when Alsace belongs to Kaiser Bill, it stands there, its dim arbor and pretty, flower-laden trellises in strange contrast to the lumbering army wagons and ugly, threatening artillery which pass along the quiet road.

And if the prayers of its rightful owners are answered, it will still stand there in the happy days to come when fair Alsace shall be a part of France again and Kaiser Bill and all his clanking claptrap are gone from it forever.

The village in which this pleasant homestead stands is close up under the boundary of Rhenish Bavaria, or Germany proper (or improper), and in the happy days when Alsace was a part of France it had been known as Leteur, after the French family which for generations had lived in the old gray house.

But long before Kaiser Bill knocked down Rheims Cathedral and black-jacked Belgium and sank the Lusitania, he changed the name of this old French village to Dundgardt, showing that even then he believed in Frightfulness; for that is what it amounted to when he changed Leteur to Dundgardt.

But he could not very well change the old family name, even if he could change the names of towns and villages in his stolen province, and old Pierre Leteur and his wife and daughter lived in the old house under the Prussian menace, and managed the vineyard and talked French on the sly.

On a certain fair evening old Pierre and his wife and daughter sat in the arbor and chatted in the language which they loved. The old man had lost an arm in the fighting when his beloved Alsace was lost to France and he had come back here still young but crippled and broken-hearted, to live under the Germans because this was the home of his people. He had found the old house and the vineyard devastated.

After a while he married an Alsatian girl very much younger than himself, and their son and daughter had grown up, German subjects it is true, but hating their German masters and loving the old French Alsace of which their father so often told them.

While Florette was still a mere child she committed the heinous crime of singing the Marseillaise. The watchful Prussian authorities learned of this and a couple of Prussian soldiers came after her, for she must answer to the Kaiser for this terrible act of sedition.

Her brother Armand, then a boy of sixteen, had shouted "Vive la France!" in the very faces of the grim soldiers and had struck one of them with all his young strength.

For this act Armand might have been shot, but, being young and agile and the German soldiers being fat and clumsy, he effected a flank move and disappeared before they could lay hands on him and it was many a long day before ever his parents heard from him again....