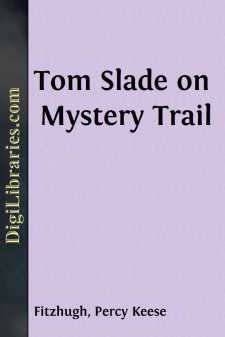 At Temple Camp you may hear the story told of how Llewellyn, scout of the first class, and Orestes, winner of the merit badges for architecture and for music, were by their scouting skill and lore instrumental in solving a mystery and performing a great good turn.

You may hear how these deft and cunning masters of the wood and the water circumvented the well laid plans of evil men and coöperated with their brother scouts in a good scout stunt, which brought fame to the quiet camp community in its secluded hills.

For one, as you shall see, is the bulliest tracker that ever picked his way down out of a tangled wilderness and through field and over hill straight to his goal.

And the other is a famous gatherer of clews, losing sight of no significant trifle, as the scout saying is, and a star scout into the bargain, if we are to believe Pee-wee Harris. I am not so sure that the ten merit badges of bugling, craftsmanship, architecture, aviation, carpentry, camping, forestry, music, pioneering and signaling should be awarded this sprightly scout (for Pee-wee is as liberal with awards as he is with gum-drops). But there can be no question as to the propriety of the music and architecture awards, and I think that the aviation award would be quite appropriate also.

Yet if you should ask old Uncle Jeb Rushmore, beloved manager of the big scout camp, about these two scout heroes, a shrewd twinkle would appear in his eye and he would refer you to the boys, who would probably only laugh at you, for they are a bantering set at Temple Camp and would jolly the life out of Daniel Boone himself if that redoubtable woodsman were there.

Listen then while I tell you of how Tom Slade, friend and brother of these two scouts, as he is of all scouts, assisted them, and of how they assisted him; and of how, out of these reciprocal good turns, there came true peace and happiness, which is the aim and end of all scouting.

It was characteristic of Tom Slade that he liked to go off alone occasionally for a ramble in the woods. It was not that he liked the scouts less, but rather that he liked the woods more. It was his wont to stroll off when his camp duties for the day were over and poke around in the adjacent woods.

The scouts knew and respected his peculiarities and preferences, particularly those who were regular summer visitors at the big camp, and few ever followed him into his chosen haunts. Occasionally some new scout, tempted by the pervading reputation and unique negligee of Uncle Jeb’s young assistant, ventured to follow him and avail himself of the tips and woods lore with which the more experienced scout’s conversation abounded when he was in a talking mood. But Tom was a sort of creature apart and the boys of camp, good scouts that they were, did not intrude upon his lonely rambles.

The season was well nigh over at Temple Camp when this thing happened. Not over exactly, but the period of arrivals had passed and the period of departures would begin in a day or two—as soon as the events with which the season culminated were over.

These were the water events, the tenderfoot carnival (not to be missed on any account) and the big affair at the main pavilion when awards were to be made. This last, in particular, would be a gala demonstration, for Mr. John Temple himself, founder of the big scout camp, had promised to be on hand to dedicate the new tract of camp property and personally to distribute the awards.

These events would break the backbone of the camping season, high schools and grammar schools would presently beckon their reluctant conscripts back to town and city, until, in the pungent chill of autumn, old Uncle Jeb, alone among the boarded-up cabins, would smoke his pipe in solitude and get ready for the long winter....