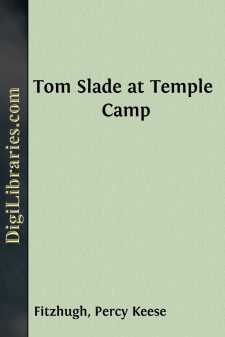 Roy Blakeley gathered up the ballots in his two hands, dropped them into the shoe box and pushed the box across the table to Mr. Ellsworth as if the matter were finally settled.

"Honorable Roy Blakeley," he added, "didn't even carry his own patrol."

This humiliating confession, offered in Roy's gayest manner, was true. The Silver Foxes had turned from their leader and, to a scout, voted for Tom Slade. It was hinted that Roy himself was responsible for this, but he was a good politician and would not talk. There was also a dark rumor that a certain young lady was mixed up in the matter and it is a fact that only the night before Roy and Mary Temple had been seen in earnest converse on the wide veranda at Grantley Square by Pee-wee Harris, who believed that a scout should be observant.

Be this as it may, Tom had carried his own patrol, the Elks, unanimously, and the Silver Foxes had voted for him like instructed delegates, while among the proud and dignified Ravens there had been but one dissenting vote. Someone had cast this for Pee-wee Harris, the Silver Fox mascot and the troop's chief exhibit. But, of course, it was only a joke. The idea of Pee-wee going away as assistant camp manager was preposterous. Why, you could hardly see him without a magnifying glass.

"If this particular majority had been much larger," announced Roy, "it wouldn't have been a majority at all; it would have been a unanimity."

"A una what?" someone asked.

"A unanimity—that's Latin for home run. Seems a pity that the only thing that prevented a clean sweep was a little three-foot pocket edition of a boy scout——"

At this moment, Pee-wee, by a miracle of dexterity, landed a ball of twine plunk in the middle of Roy's face.

"He's a boss," shouted Pee-wee, "that's what he is. A boss is a feller that has people elected and then makes them do what he says."

"Well, you were glad enough to vote for him with the rest, weren't you?" laughed the scoutmaster.

And Pee-wee had to confess that he was.

But there was no doubt that Roy had managed the whole thing, and if ever political boss saw his fondest wishes realized Roy did now.

"I think," said Mr. Ellsworth, "that it is up to Tom to deliver his speech of acceptance."

"Sure it is," said Westy Martin (Silver Fox). "We want to know his policies. Is he going to favor the Elks or is he going to be neutral?"

"Is he for troop first or camp first?" asked Doc. Carson (Raven and First-aid scout).

"Is Roy Blakeley going to come in for three or four helpings at mess because he ran the campaign?" asked Connie Bennett, of the new Elks.

Tom looked uneasily at Mr. Ellsworth and on the scoutmaster's laughing nod of encouragement arose.

He was not at his best in a thing of this kind; he had always envied Roy his easy, bantering manner, but he was not the one to shirk a duty, so he stood up....