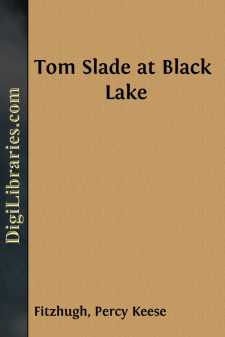 Scouting is not a thing to play with, like a tin steam-engine, and then to throw aside. If you once get caught in the net of scouting, you will never disentangle yourself. A fellow may grow up and put on long trousers and go and call on a girl and all that sort of thing, but if he was a Scout, he will continue to be a Scout, and it will stick out all over him. You'll find him back in the troop as assistant or scoutmaster or something or other.

I think Tom Slade is a very good example. He left the troop to go and work on a transport; he got into the motorcycle messenger service; he became one of the greatest daredevils of the air; he came home quite "grown up" as you would say, and knuckled down to be a big business man.

Then, when it came to a show down, what did he do? He found out that he was just a plain Scout, shouldered his axe, and went off and did a big scout job all alone. So there you are.

I am sorry for those who would have him too old for scouting, and who seem to think that a fellow can lay aside all he has learned in the woods and in the handbook, the same as he can lay aside his short trousers. It isn't as easy as all that.

Did you suppose that Tom Slade was going to get acquainted with nature, with the woods and streams and trees, and make them his friends, and then repudiate these friends?

Do you think that a Scout is a quitter?

Tom Slade was always a queer sort of duck, and goodness only knows what he will do next. He may go to the North Pole for all I know. But one thing you may be sure of; he is still a Scout of the Scouts, and if you think he is too old to be a Scout, then how about Buffalo Bill?

The fact is that Tom is just beginning to reap the real harvest of scouting. The best is yet to come, as Pee-wee Harris usually observes, just before dessert is served at dinner. If it is any satisfaction to you to know it, Tom is more of a Scout than at any time in his career, and there is a better chance of his being struck by lightening than his drifting away from the troop whose adventures you have followed with his.

It is true that Tom has grown faster than his companions and found it necessary to go to work while they are still at school. And this very circumstance will enable us to see what scouting has done for him.

Indeed if I could not show you that, then all of those eight stores of his adventures would have been told to little purpose. The chief matter of interest about a trail is where it leads to. It may be an easy trail or a hard trail, but the question is, where does it go to?

It would be a fine piece of business, I think, to leave Tom sitting on a rock near the end of the trail without giving you so much as a glimpse of what is at the end of it....