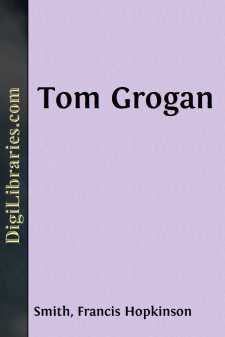 Something worried Babcock. One could see that from the impatient gesture with which he turned away from the ferry window on learning he had half an hour to wait. He paced the slip with hands deep in his pockets, his head on his chest. Every now and then he stopped, snapped open his watch and shut it again quickly, as if to hurry the lagging minutes.

For the first time in years Tom Grogan, who had always unloaded his boats, had failed him. A scow loaded with stone for the sea-wall that Babcock was building for the Lighthouse Department had lain three days at the government dock without a bucket having been swung across her decks. His foreman had just reported that there was not enough material to last the concrete-mixers two hours. If Grogan did not begin work at once, the divers must come up.

Heretofore to turn over to Grogan the unloading of material for any submarine work had been like feeding grist to a mill—so many tons of concrete stone loaded on the scows by the stone crushing company had meant that exact amount delivered by Grogan on Babcock's mixing-platforms twenty-four hours after arrival, ready for the divers below. This was the way Grogan had worked, and he had required no watching.

Babcock's impatience did not cease even when he took his seat on the upper deck of the ferry-boat and caught the welcome sound of the paddles sweeping back to the landing at St. George. He thought of his men standing idle, and of the heavy penalties which would be inflicted by the Government if the winter caught him before the section of wall was complete. It was no way to serve a man, he kept repeating to himself, leaving his gangs idle, now when the good weather might soon be over and a full day's work could never be counted upon. Earlier in the season Grogan's delay would not have been so serious.

But one northeaster as yet had struck the work. This had carried away some of the upper planking—the false work of the coffer-dam; but this had been repaired in a few hours without delay or serious damage. After that the Indian summer had set in—soft, dreamy days when the winds dozed by the hour, the waves nibbled along the shores, and the swelling breast of the ocean rose and fell as if in gentle slumber.

But would this good weather last? Babcock rose hurriedly, as this anxiety again took possession of him, and leaned over the deck-rail, scanning the sky. He did not like the drift of the low clouds off to the west; southeasters began that way. It looked as though the wind might change.

Some men would not have worried over these possibilities. Babcock did. He was that kind of man.

When the boat touched the shore, he sprang over the chains, and hurried through the ferry-slip.

"Keep an eye out, sir," the bridge-tender called after him,—he had been directing him to Grogan's house,—"perhaps Tom may be on the road."

Then it suddenly occurred to Babcock that, so far as he could remember, he had never seen Mr. Thomas Grogan, his stevedore. He knew Grogan's name, of course, and would have recognized his signature affixed to the little cramped notes with which his orders were always acknowledged, but the man himself might have passed unnoticed within three feet of him....