Tom Finch's Monkey and How he Dined with the Admiral 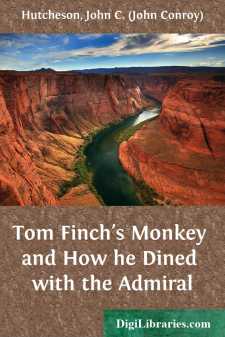 And how he Dined with the Admiral.

We were cruising off Callao on the Pacific station when it all happened, and I daresay there are a good many others who will recollect all about it as well as myself. But to explain the matter properly I must go back a little in my dates; for, instead of Callao at the commencement of my yarn, you must read Calabar.

You see, I was in the Porpoise at the time, a small old-fashioned, paddle-wheel steamer that had been ordered across from the West Coast of Africa by “my lords” of the Admiralty to reinforce our squadron in South American waters on account of a war breaking out between Chili and Peru. Being a “sub” on board of her, and consequently subject to the authorities that be, when the Porpoise was obliged to abandon the fragrant mangrove swamps at the mouth of the Congo river, where we had been enjoying ourselves for over a twelvemonth amidst the delights of a deadly miasma that brought on perpetual low fever, and as constant a consumption of quinine and bottled beer to counteract its effects, I was of course forced to accompany her across the Atlantic and round the Horn to her allotted destination.

Thence “this plain unvarnished tale,” which is as clear as mud in a ditch, although you needn’t believe it if you don’t like—there is no compulsion required to make hungry people eat roast mutton!

Tom Finch, the lieutenant in command of the Porpoise, who had got his promotion through the death vacancy of his senior at Cape Coast Castle—he was just ahead of me on the roster, luckily for him—was one of the jolliest fellows I ever sailed with or under, since I entered the service; and I’m sure I’ve known a few “swabs” in my time!

Unlike some junior officers I could name, when suddenly intrusted with the reins of power, there was nothing of the martinet about Tom, even on the first day he assumed his new rank, when a little extra pomposity might have been excusable. But no, he gave himself no airs or graces whatever.

He was the same Tom Finch who had chaffed and larked and talked confidence with me in the gunroom, now that he trod the quarter-deck “in all his war paint,” as I told him somewhat impudently, the “skipper” of HMS Porpoise, “paddle sloop, 6 guns,” as she was described in the Navy List—the same unaffected, jovial, good-natured sailor whom everybody liked, men and messmates alike. His only weakness was a love for practical joking, which he would carry out sometimes, perhaps, to a rather ticklish extent—for his own good, that is, as he never knowingly did anyone else an injury by it.

“What will you do with your monkey?” I said, when the mail brought in our orders from the commodore on the West Coast for us to sail for Monte Video at once, and there await our further instructions—which would be sent on from England; “what will you do with him when we go?”

“Take him with me of course,” answered Tom; “why shouldn’t I?”

“Well, I don’t see any reason against it certainly,” I replied; “now that you are captain of the ship, and can do as you please without asking anybody’s leave.”

“Poor Griffin,” said Tom, “he did object to Jocko’s society; that was the reason I always used to keep the dear fellow ashore; however, as you say, Gerald, I am my own master and can do as I like now....