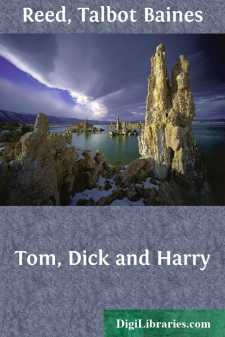 Who shot the Dog?

A shot! a yell! silence!

Such, as soon as I could collect myself sufficiently to form an idea at all, were my midnight sensations as I sat up in my bed, with my chin on my knees, my hair on end, my body bedewed with cold perspiration, and my limbs trembling from the tips of my fingers to the points of my toes.

I had been peacefully dreaming—something about an automatic machine into which you might drop a Latin exercise and get it back faultlessly construed and written out. I had, in fact, got to the point of attempting nefariously to avail myself of its services. I had folded up the fiendish exercise on the passive subjunctive which Plummer had set us overnight, and was in the very act of consigning it to the mechanical crib, when the shot and the yell projected me, all of a heap, out of dreamland into the waking world.

At first I was convinced it must have been the sound of my exercise falling into the machine, and Plummer’s howl of indignation at finding himself circumvented.

No! Machine and all had vanished, but the noises rang on in my waking ears.

Was it thunder and storm? No. The pale moonlight poured in a gentle flood through the window, and not a leaf stirred in the elms without.

Was it one of the fellows fallen out of bed? No. On every hand reigned peaceful slumber. There was Dicky Brown in the next bed, flat on his back, open-mouthed, snoring monotonously, like a muffled police rattle. There was Graham minor on the other side, serenely wheezing up and down the scale, like a kettle simmering on the hob. There opposite, among the big boys, lay Faulkner, with the moonshine on his pale face, his arms above his head, smirking even in his sleep. And there was Parkin just beyond, with the sheet half throttling him, as usual, sprawling diagonally across his bed, and a bare foot sticking out at the end. And here lay—

Hullo! My eyes opened and my teeth chattered faster. Where was Tempest? His bed was next to Parkin’s, but it was empty. In the moonlight and in the midst of my fright I could see his shirt and waistcoat still dangling on the bed-post, while the coat and trousers and slippers were gone. The bed itself was tumbled, and had evidently been lain in; but the sleeper had apparently risen hurriedly, partly dressed himself, and gone out.

If only I could have got my tongue loose from the roof of the mouth to which it was cleaving, I should have yelled aloud at this awful discovery. As it was I yelled silently. For of all terrors upon earth, sleep-walking was the one I dreaded the most. Not that I had ever walked myself, or, indeed, enjoyed the embarrassing friendship of any one who did. But I had read the books and knew all about it. I would sooner have faced a dozen ghosts than a somnambulist.

I had no doubt in my mind that the Dux’s empty bed was to be accounted for in this uncanny manner, and that the shot and yell were intimately connected with his mysterious disappearance. Now I thought of it, he had not been himself for some time....