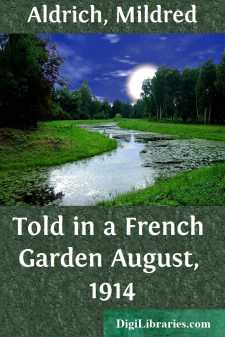 INTRODUCTION HOW WE CAME INTO THE GARDEN

It was by a strange irony of Fate that we found ourselves reunited for a summer's outing, in a French garden, in July, 1914.

With the exception of the Youngster, we had hardly met since the days of our youth.

We were a party of unattached people, six men, two women, your humble servant, and the Youngster, who was an outsider.

There was the Doctor, who had studied long in Germany, and become an authority on mental diseases, developed a distaste for therapeutics, and a passion for research and the laboratory. There was the Lawyer, who knew international law as he knew his Greek alphabet, and hated a court room. There was the Violinist, who was known the world over in musical sets,—everywhere, except in the concert room. There was the Journalist, who had travelled into almost as many queer places as Richard Burton, seen more wars, and followed more callings. There was the Sculptor, the fame of whose greater father had almost paralyzed a pair of good modeller's hands. There was the Critic, whose friends believed that in him the world had lost a great romancer, but whom a combination of hunger and laziness, and a proneness to think that nothing not genius was worth while, had condemned to be a mere breadwinner, but a breadwinner who squeezed a lot out of life, and who fervently believed that in his next incarnation he would really be "it." Then there was "Me," and of the other two women—one was a Trained Nurse, and the other a Divorcée, and—well, none of us really knew just what she had become, but we knew that she was very rich, and very handsome, and had a leaning toward some sort of new religion. As for the Youngster—he was the son of an old chum of the Doctor—his ward, in fact—and his hobby was flying.

Our reunion, after so many years, was a rather pretty story.

In the summer of 1913, the Doctor and the Divorcée, who had lost sight of one another for twenty years, met by chance in Paris. Her ex-husband had been a college friend of the Doctor. They saw a great deal of one another in the lazy way that people who really love France, and are done sightseeing, can do.

One day it occurred to them to take a day's trip into the country, as unattached people now and then can do. They might have gone out in a car—but they chose the railroad, with a walk at the end—on the principle that no one can know and love a country who does not press its earth beneath his feet,—the Doctor would probably have said, "lay his head upon its bosom." By an accident—they missed a train—they found themselves at sunset of a beautiful day in a small village, and with no possible way of getting back to Paris that night unless they chose to walk fifteen miles to the nearest railway junction. After a long day's tramp that seemed too much of a good thing.

So they looked about to find a shelter for the night. The village—it was only a hamlet—had no hotel, no café, even. Finally an old peasant said that old Mother Servin—a widow—living a mile up the road—had a big house, lived alone, and could take them in,—if she wanted to,—he could not say that she would.

It seemed to them worth trying, so they started off in high spirits to tramp another mile, deciding that, if worse became worst—well—the night was warm—they could sleep by the roadside under the stars....