Told by the Northmen: Stories from the Eddas and Sagas 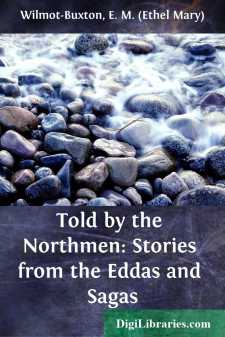 Hakon's Lay By James Russell Lowell "O Skald, sing now an olden song,Such as our fathers heard who led great lives;And, as the bravest on a shield is borneAlong the waving host that shouts him king,So rode their thrones upon the thronging seas!" Then the old man arose: white-haired he stood,White-bearded, and with eyes that looked afarFrom their still region of perpetual snow,Over the little smokes and stirs of men:His head was bowed with gathered flakes of years,As winter bends the sea-foreboding pine,But something triumphed in his brow and eye,Which whoso saw it, could not see and crouch:Loud rang the emptied beakers as he mused,Brooding his eyried thoughts; then, as an eagleCircles smooth-winged above the wind-vexed woods,So wheeled his soul into the air of songHigh o'er the stormy hall; and thus he sang: "The fletcher for his arrow-shaft picks outWood closest-grained, long-seasoned, straight as light;And, from a quiver full of such as these,The wary bow-man, matched against his peers,Long doubting, singles yet once more the best.Who is it that can make such shafts as Fate?What archer of his arrows is so choice,Or hits the white so surely? They are men,The chosen of her quiver; nor for herWill every reed suffice, or cross-grained stickAt random from life's vulgar fagot plucked:Such answer household ends; but she will haveSouls straight and clear, of toughest fibre, soundDown to the heart of heat; from these she stripsAll needless stuff, all sapwood; hardens them,From circumstance untoward feathers plucksCrumpled and cheap, and barbs with iron will:The hour that passes is her quiver-boy;When she draws bow, 'tis not across the wind,Nor 'gainst the sun, her haste-snatched arrow sings,For sun and wind have plighted faith to her:Ere men have heard the sinew twang, behold,In the butt's heart her trembling messenger! "The song is old and simple that I sing:Good were the days of yore, when men were triedBy ring of shields, as now by ring of gold;But, while the gods are left, and hearts of men,And the free ocean, still the days are good;Through the broad Earth roams OpportunityAnd knocks at every door of hut or hall,Until she finds the brave soul that she wants." He ceased, and instantly the frothy tideOf interrupted wassail roared along. TOLD BY THE NORTHMEN: Chapter I How All Things Began This is the tale which the Northmen tellconcerning the Beginning of Things.

nce upon a time, before ever this world was made, there was neither earth nor sea, nor air, nor light, but only a great yawning gulf, full of twilight, where these things should be.

To the north of this gulf lay the Home of Mist, a dark and dreary land, out of which flowed a river of water from a spring that never ran dry. As the water in its onward course met the bitter blasts of wind from the yawning gulf, it hardened into great blocks of ice, which rolled far down into the abyss with a thunderous roar and piled themselves one on another until they formed mountains of glistening ice.

South of this gulf lay the Home of Fire, a land of burning heat, guarded by a giant with a flaming sword which, as he flashed it to and fro before the entrance, sent forth showers of sparks. And these sparks fell upon the ice-blocks and partly melted them, so that they sent up clouds of steam; and these again were frozen into hoar-frost, which filled all the space that was left in the midst of the mountains of ice.

Then one day, when the gulf was full to the very top, this great mass of frosty rime, warmed by the flames from the Home of Fire and frozen by the cold airs from the Home of Mist, came to life and became the Giant Ymir, with a living, moving body and cruel heart of ice.

Now there was as yet no tree, nor grass, nor anything that would serve for food, in this gloomy abyss. But when the Giant Ymir began to grope around for something to satisfy his hunger, he heard a sound as of some animal chewing the cud; and there among the ice-hills he saw a gigantic cow, from whose udder flowed four great streams of milk, and with this his craving was easily stilled.

But the cow was hungry also, and began to lick the salt off the blocks of ice by which she was surrounded. And presently, as she went on licking with her strong, rough tongue, a head of hair pushed itself through the melting ice. Still the cow went on licking, until she had at last melted all the icy covering and there stood fully revealed the frame of a mighty man....