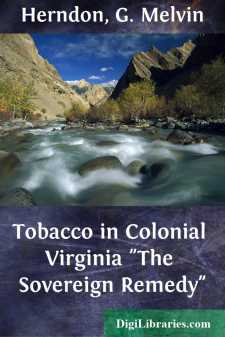 Tobacco was probably first brought to the shores of England from Florida by Sir John Hawkins in 1565. Englishmen were growing it by the 1570's, and after the return of the daring Sir Francis Drake to England with a large quantity of tobacco captured in the West Indies in 1586, the use of tobacco in England was increased substantially. By 1604 its consumption had become so extensive as to lead to the publication of King James' Counter Blast, condemning the use of tobacco; nevertheless, six years later the amount brought into Great Britain was valued at £60,000.

Some of the colonists were probably acquainted with tobacco before they landed at Jamestown and found the Indians cultivating and using it under the name of uppowoc or apooke. However, it was not until 1612 that its cultivation began among the English settlers, even in small patches. Previously their attention had been centered entirely on products that could be used for food. Captain John Smith wrote that none of the native crops were planted at first, not even tobacco.

The story of tobacco in Virginia begins with the ingenious John Rolfe. He was one of the many Englishmen who had come to enjoy the fragrant aroma and taste of the imported Spanish tobacco; and upon his arrival at Jamestown in May, 1610, Rolfe found that tobacco could be obtained only by buying it from the Indians, or by cultivating it. There seems to have been no spontaneous growth then as now. Owing to the frequent unfriendly atmosphere between the colonists and the Indians, Rolfe probably decided to grow a small patch for his own use. He also had a desire to find some profitable commodity that could be sold in England and thus promote the success and prosperity of the settlers and the London Company. Driven by these two motives John Rolfe became the first colonist to successfully grow tobacco, the plant that was to wield such a tremendous influence on the history of Virginia.

Nicotiana rustica, the native tobacco of North America, was found to be inferior to that grown in the Spanish Colonies. Botanists state that Nicotiana rustica had a much greater nicotine content and sprouted or branched more than that cultivated today. William Strachey, one of the first colonists, gave the following description of the native plant grown in 1616:

It is not of the best kynd, it is but poore and weake, and of a byting tast, it growes not fully a yard above the ground, bearing a little yellowe flower, like to hennebane, the leaves are short and thick, somewhat round at the upper end....

In 1611 Rolfe decided to experiment with seed of the mild Spanish variety. He persuaded a shipmaster to bring him some tobacco seed from the Island of Trinidad and Caracas, Venezuela; and by June, 1612, tobacco from the imported seeds was being cultivated at Jamestown. On July 20, 1613, a Captain Robert Adams landed the Elizabeth in England with a sample of Rolfe's first experimental crop. In England, this first shipment was described as excellent in quality, but it was still inferior to Spanish tobacco....