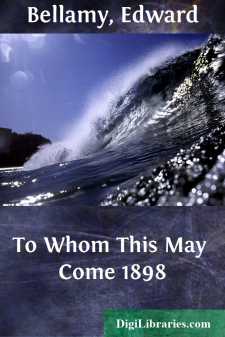 It is now about a year since I took passage at Calcutta in the ship Adelaide for New York. We had baffling weather till New Amsterdam Island was sighted, where we took a new point of departure. Three days later, a terrible gale struck us Four days we flew before it, whither, no one knew, for neither sun, moon, nor stars were at any time visible, and we could take no observation. Toward midnight of the fourth day, the glare of lightning revealed the Adelaide in a hopeless position, close in upon a low-lying shore, and driving straight toward it. All around and astern far out to sea was such a maze of rocks and shoals that it was a miracle we had come so far. Presently the ship struck, and almost instantly went to pieces, so great was the violence of the sea. I gave myself up for lost, and was indeed already past the worst of drowning, when I was recalled to consciousness by being thrown with a tremendous shock upon the beach. I had just strength enough to drag myself above the reach of the waves, and then I fell down and knew no more.

When I awoke, the storm was over. The sun, already halfway up the sky, had dried my clothing, and renewed the vigor of my bruised and aching limbs. On sea or shore I saw no vestige of my ship or my companions, of whom I appeared the sole survivor. I was not, however, alone. A group of persons, apparently the inhabitants of the country, stood near, observing me with looks of friendliness which at once freed me from apprehension as to my treatment at their hands. They were a white and handsome people, evidently of a high order of civilization, though I recognized in them the traits of no race with which I was familiar.

Seeing that it was evidently their idea of etiquette to leave it to strangers to open conversation, I addressed them in English, but failed to elicit any response beyond deprecating smiles. I then accosted them successively in the French, German, Italian, Spanish, Dutch, and Portuguese tongues, but with no better results. I began to be very much puzzled as to what could possibly be the nationality of a white and evidently civilized race to which no one of the tongues of the great seafaring nations was intelligible. The oddest thing of all was the unbroken silence with which they contemplated my efforts to open communication with them. It was as if they were agreed not to give me a clue to their language by even a whisper; for while they regarded one another with looks of smiling intelligence, they did not once open their lips. But if this behavior suggested that they were amusing themselves at my expense, that presumption was negatived by the unmistakable friendliness and sympathy which their whole bearing expressed.

A most extraordinary conjecture occurred to me. Could it be that these strange people were dumb? Such a freak of nature as an entire race thus afflicted had never indeed been heard of, but who could say what wonders the unexplored vasts of the great Southern Ocean might thus far have hid from human ken? Now, among the scraps of useless information which lumbered my mind was an acquaintance with the deaf-and-dumb alphabet, and forthwith I began to spell out with my fingers some of the phrases I had already uttered to so little effect. My resort to the sign language overcame the last remnant of gravity in the already profusely smiling group. The small boys now rolled on the ground in convulsions of mirth, while the grave and reverend seniors, who had hitherto kept them in check, were fain momentarily to avert their faces, and I could see their bodies shaking with laughter. The greatest clown in the world never received a more flattering tribute to his powers to amuse than had been called forth by mine to make myself understood. Naturally, however, I was not flattered, but on the contrary entirely discomfited. Angry I could not well be, for the deprecating manner in which all, excepting of course the boys, yielded to their perception of the ridiculous, and the distress they showed at their failure in self-control, made me seem the aggressor....