To The Gold Coast for Gold, Vol. II A Personal Narrative 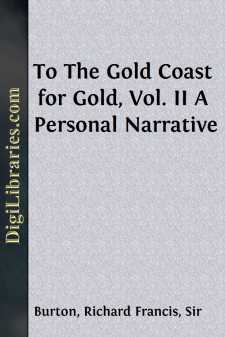 CHAPTER XII. THE SÁ LEONITE AT HOME AND ABROAD.

In treating this part of the subject I shall do my best to avoid bitterness and harsh judging as far as the duty of a traveller—that of telling the whole truth—permits me. It is better for both writer and reader to praise than to dispraise. Most Englishmen know negroes of pure blood as well as 'coloured persons' who, at Oxford and elsewhere, have shown themselves fully equal in intellect and capacity to the white races of Europe and America. These men afford incontestable proofs that the negro can be civilised, and a high responsibility rests upon them as the representatives of possible progress. But hitherto the African, as will presently appear, has not had fair play. The petting and pampering process, the spirit of mawkish reparation, and the coddling and high-strung sentimentality so deleterious to the tone of the colony, were errors of English judgment pure and simple. We can easily explain them.

The sad grey life of England, the reflection of her climate, has ever welcomed a novelty, a fresh excitement. Society has in turn lionised the marmiton, or assistant-cook, self-styled an 'Emir of the Lebanon;' the Indian 'rajah,' at home a munshi, or language-master; and the 'African princess,' a slave-girl picked up in the bush. It is the same hunger for sensation which makes the mob stare at the Giant and the Savage, the Fat Lady, the Living Skeleton, and the Spotted Boy.

According to Père Labat, the French founded in 1365 Petit Paris at 'Serrelionne,' a town defended by the fort of the Dieppe and Rouen merchants. The official date of the discovery is 1480, when Pedro de Cintra, one of the gentlemen of Prince Henry 'the Navigator,' visited the place, after his employer's death A.D. 1463. In 1607 William Finch, merchant, found the names of divers Englishmen inscribed on the rocks, especially Thos. Candish, or Cavendish, Captain Lister, and Sir Francis Drake. In 1666 the Sieur Villault de Bellefons tells us that the river from Cabo Ledo, or Cape Sierra Leone, had several bays, of which the fourth, now St. George's, was called Baie de France. This seems to confirm Père Labat. I have noticed the Tasso fort, built by the English in 1695. The next account is by Mr. Surveyor Smith, [Footnote: He is mentioned in the last chapter.] who says 'it is not certain when the English became masters of Sierra Leone, which they possessed unmolested until Roberts the pirate took it in 1720.' Between 1785 and 1787 Lieutenant John Matthews, R.N., resided here, and left full particulars concerning the export slave-trade, apparently the only business carried on by the British....