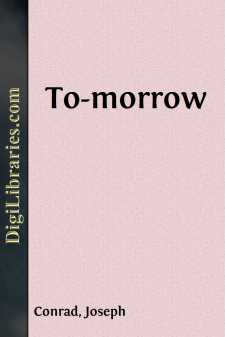 What was known of Captain Hagberd in the little seaport of Colebrook was not exactly in his favour. He did not belong to the place. He had come to settle there under circumstances not at all mysterious—he used to be very communicative about them at the time—but extremely morbid and unreasonable. He was possessed of some little money evidently, because he bought a plot of ground, and had a pair of ugly yellow brick cottages run up very cheaply. He occupied one of them himself and let the other to Josiah Carvil—blind Carvil, the retired boat-builder—a man of evil repute as a domestic tyrant.

These cottages had one wall in common, shared in a line of iron railing dividing their front gardens; a wooden fence separated their back gardens. Miss Bessie Carvil was allowed, as it were of right, to throw over it the tea-cloths, blue rags, or an apron that wanted drying.

"It rots the wood, Bessie my girl," the captain would remark mildly, from his side of the fence, each time he saw her exercising that privilege.

She was a tall girl; the fence was low, and she could spread her elbows on the top. Her hands would be red with the bit of washing she had done, but her forearms were white and shapely, and she would look at her father's landlord in silence—in an informed silence which had an air of knowledge, expectation and desire.

"It rots the wood," repeated Captain Hagberd. "It is the only unthrifty, careless habit I know in you. Why don't you have a clothes line out in your back yard?"

Miss Carvil would say nothing to this—she only shook her head negatively. The tiny back yard on her side had a few stone-bordered little beds of black earth, in which the simple flowers she found time to cultivate appeared somehow extravagantly overgrown, as if belonging to an exotic clime; and Captain Hagberd's upright, hale person, clad in No. 1 sail-cloth from head to foot, would be emerging knee-deep out of rank grass and the tall weeks on his side of the fence. He appeared, with the colour and uncouth stiffness of the extraordinary material in which he chose to clothe himself—"for the time being," would be his mumbled remark to any observation on the subject—like a man roughened out of granite, standing in a wilderness not big enough for a decent billiard-room. A heavy figure of a man of stone, with a red handsome face, a blue wandering eye, and a great white beard flowing to his waist and never trimmed as far as Colebrook knew.

Seven years before, he had seriously answered, "Next month, I think," to the chaffing attempt to secure his custom made by that distinguished local wit, the Colebrook barber, who happened to be sitting insolently in the tap-room of the New Inn near the harbour, where the captain had entered to buy an ounce of tobacco. After paying for his purchase with three half-pence extracted from the corner of a handkerchief which he carried in the cuff of his sleeve, Captain Hagberd went out. As soon as the door was shut the barber laughed. "The old one and the young one will be strolling arm in arm to get shaved in my place presently. The tailor shall be set to work, and the barber, and the candlestick maker; high old times are coming for Colebrook, they are coming, to be sure. It used to be 'next week,' now it has come to 'next month,' and so on—soon it will be next spring, for all I know."

Noticing a stranger listening to him with a vacant grin, he explained, stretching out his legs cynically, that this queer old Hagberd, a retired coasting-skipper, was waiting for the return of a son of his. The boy had been driven away from home, he shouldn't wonder; had run away to sea and had never been heard of since....