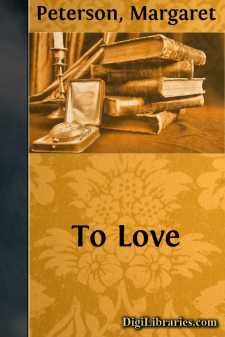 CHAPTER I "Oh, but the door that waits a friend  Swings open to the day.  There stood no warder at my gate  To bid love stand or stay."

"You don't believe in marriage, and I can't afford to marry"—Gilbert Stanning laughed, but the sound was not very mirthful and his eyes, as he glanced at his companion, were uneasy and not quite honest. "We are the right sort of people to drift together, aren't we, Joan?" His hands as he spoke were restless, fidgeting with a piece of string which he tied and untied repeatedly.

Joan Rutherford sat very straight in her chair, her eyes looking out in front of her. His words had called just the faintest tinge of colour to her cheeks. It was not exactly a beautiful face, but it was above everything else lovable and appealing. Joan was twenty-three, yet she looked still a child; the lines of her face were all a little indefinite, except the obstinacy of her chin and the frankness of her eyes. Her one claim to beauty, indeed, lay in those eyes; wide, innocent, unfathomable, sometimes green, sometimes brown flecked with gold. They seemed to hint at tragedy, yet they were far more often laughter-filled than anything else. For the rest, Joan was an ordinary independent young lady of the twentieth century who had lived in London "on her own" for six months.

How her independence had come about is a complicated story. It had not been with the approval of her people; the only people she possessed being an old uncle and aunt who lived in the country. All Joan's nearer relations were dead; had died when she was still a child; Uncle John and Aunt Janet had seen to her bringing up. But at twenty-two and a-half Joan had suddenly rebelled against the quiet monotony of their home life. She had broken it to them gently at first, with an obstinate resolve to get her own way at the back of her mind; in the end, as is usually the case when youth pits itself against age, she had won the day. Uncle John had agreed to a small but adequate allowance, Aunt Janet had wept a few rather bitter tears in private, and Joan had come to London to train as a secretary, according to herself. They had taken rooms for her in the house of a lady Aunt Janet had known in girlhood, and there Joan had dutifully remained. It was not very lively, but she had a sense of gratitude in her heart towards Aunt Janet which prevented her from moving. Joan was not thinking of all this as she sat there, nor was she exactly seeing the sweep of grass that spread out in front of them, nor the flowering shrubs on every side. Hyde Park was ablaze with flowers on this hot summer's day and in addition a whole bed of heliotrope was in bloom just behind their chairs. The faint sweet scent of the flowers mixed with Joan's thoughts and brought a quick vision of Aunt Janet. But more deeply still her mind was struggling with a desire to know what exactly it was that swayed her when Gilbert Stanning spoke to her, or when—as more often than not—he in some way or other contrived to touch her. She had met him first at a dance that she had been taken to by another girl and she had known him now about four months. It was strange and a little disturbing the tumult his eyes waked in her heart. The first time he had kissed her, one evening when they had been driving home from the theatre in a taxi, she had turned and clung to him, because suddenly it had seemed as if the whole world was sweeping away from her. Gilbert had taken the action to mean that she loved him; he had never wavered from that belief since. He possessed every spare minute of her days, he kissed her whenever he could, and Joan never objected. Only oddly, at moments such as this, her mind would suddenly push forward the terse argument:

"Do you love him, or is it just the little animal in you that likes all he has to give?"

Joan was often greatly disturbed about what she called the beast side of her. During her year in London, under the guidance of another girl far older and wiser than herself, she had plunged recklessly into all sorts of knowledge, gleaned mostly from books such as Aunt Janet and even Uncle John had never heard of, far less read. So Joan knew that there is a beast side to all human nature, and she was for ever pausing to probe this or that sensation down to its root. Her books had taught her other theories too, and very young, very impetuous by nature, Joan rushed to a full acceptance of the facts over which older women were ....