Tiger and Tom and Other Stories for Boys 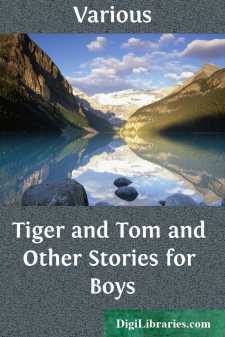 The day was pleasant, in that particularly pleasant part of summer time, which the boys call "vacation," when Tiger and Tom walked slowly down the street together.

You may think it strange that I mention Tiger first, but I assure you, Tom would not have been in the least offended by the preference. Indeed, he would have told you that Tiger was a most wonderful dog, and knew as much as any two boys, though this might be called extravagant.

Nearly a year ago, on Tom's birthday, Tiger arrived as a present from Tom's uncle, and as the dog leaped with a dignified bound from the wagon in which he made his journey, Tom looked for a moment into his great, wise eyes, and impulsively threw his arms around his shaggy neck.

Tiger was pleased with Tom's bright face, and affectionately licked his smooth cheeks. So the league of friendship was complete in an hour.

Tom had a pleasant, round face, and you might live with him a week, and think him one of the noblest, most generous boys you ever knew. But some day you would probably discover that he had a most violent temper.

You would be frightened to see his face crimson with rage, as he stamped his feet, shook his little sister, spoke improperly to his mother, and above all, displeased his great Father in heaven.

Now I am going to tell you of something which happened to Tom, on this account, which he never forgot to the end of his life.

Tiger and Tom were walking down the street together one pleasant day, when they met Dick Casey, a schoolfellow of Tom's.

"O Dick!" cried Tom, "I'm going to father's grain store a little while. Let's go up in the loft and play."

Dick had just finished his work in his mother's garden, and was ready for a little amusement. So the two went up in the loft together, and enjoyed themselves for a long time.

But at last one of those trifling disputes arose, in which little boys are so apt to indulge. Pretty soon there were angry words, then (Oh, how sorry I am to say it!) Tom's wicked passions got the mastery of him, and he beat little Dick severely.

Tiger, who must have been ashamed of his master, pulled hard at his coat, and whined piteously, but all in vain. At last Tom stopped, from mere exhaustion.

Tom's face became crimson, and darting upon Dick, he gave him a sudden push. Alas! he was near to the open door. Dick screamed, threw up his arms, and in a moment was gone.

Tom's heart stood still, and an icy chill crept over him from head to foot. At first he could not stir; then—he never knew how he got there, but he found himself standing beside his little friend. Some men were raising him carefully from the hard sidewalk.

"Is he dead?" almost screamed Tom.

"He didn't fall," groaned Tom, who never could be so mean as to tell a lie, "I pushed him out."

"You pushed him, you wicked boy," cried a rough voice. "Do you know you ought to be sent to jail, and if he dies, maybe you'll be hung."

Tom grew as white as Dick, whom he had followed into the store, and he heard all that passed as if in a dream.

"Is he badly hurt?" cried some one.

"Only his hands," was the answer. "The rope saved him, he caught hold of the rope and slipped down; but his hands are dreadfully torn—he has fainted from pain."

Just then Tom's father came in, and soon understood the case. The look he gave his unhappy son, so full of sorrow, not unmingled with pity, was too much for Tom, and he stole out followed by the faithful Tiger.

He wandered to the woods, and threw himself upon the ground. One hour ago he was a happy boy, and now what a terrible change! What had made the difference?—Nothing but the indulgence of this wicked, violent temper.

His mother had often warned him of the fearful consequences. She had told him that little boys who would not learn to govern themselves, grew up to be very wicked men, and often became murderers in some moment of passion.

And now, Tom shuddered to think he was almost a murderer! Nothing but God's great mercy in putting that rope in Dick's way, had saved him from carrying that load of sorrow and guilt all the rest of his life.

But poor Dick might die yet—how pale he looked—how strange!...