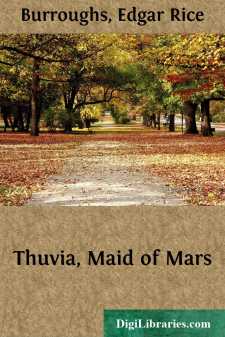 Upon a massive bench of polished ersite beneath the gorgeous blooms of a giant pimalia a woman sat. Her shapely, sandalled foot tapped impatiently upon the jewel-strewn walk that wound beneath the stately sorapus trees across the scarlet sward of the royal gardens of Thuvan Dihn, Jeddak of Ptarth, as a dark-haired, red-skinned warrior bent low toward her, whispering heated words close to her ear.

"Ah, Thuvia of Ptarth," he cried, "you are cold even before the fiery blasts of my consuming love! No harder than your heart, nor colder is the hard, cold ersite of this thrice happy bench which supports your divine and fadeless form! Tell me, O Thuvia of Ptarth, that I may still hope—that though you do not love me now, yet some day, some day, my princess, I—"

The girl sprang to her feet with an exclamation of surprise and displeasure. Her queenly head was poised haughtily upon her smooth red shoulders. Her dark eyes looked angrily into those of the man.

"You forget yourself, and the customs of Barsoom, Astok," she said. "I have given you no right thus to address the daughter of Thuvan Dihn, nor have you won such a right."

The man reached suddenly forth and grasped her by the arm.

"You shall be my princess!" he cried. "By the breast of Issus, thou shalt, nor shall any other come between Astok, Prince of Dusar, and his heart's desire. Tell me that there is another, and I shall cut out his foul heart and fling it to the wild calots of the dead sea-bottoms!"

At touch of the man's hand upon her flesh the girl went pallid beneath her coppery skin, for the persons of the royal women of the courts of Mars are held but little less than sacred. The act of Astok, Prince of Dusar, was profanation. There was no terror in the eyes of Thuvia of Ptarth—only horror for the thing the man had done and for its possible consequences.

"Release me." Her voice was level—frigid.

The man muttered incoherently and drew her roughly toward him.

"Release me!" she repeated sharply, "or I call the guard, and the Prince of Dusar knows what that will mean."

Quickly he threw his right arm about her shoulders and strove to draw her face to his lips. With a little cry she struck him full in the mouth with the massive bracelets that circled her free arm.

"Calot!" she exclaimed, and then: "The guard! The guard! Hasten in protection of the Princess of Ptarth!"

In answer to her call a dozen guardsmen came racing across the scarlet sward, their gleaming long-swords naked in the sun, the metal of their accoutrements clanking against that of their leathern harness, and in their throats hoarse shouts of rage at the sight which met their eyes.

But before they had passed half across the royal garden to where Astok of Dusar still held the struggling girl in his grasp, another figure sprang from a cluster of dense foliage that half hid a golden fountain close at hand. A tall, straight youth he was, with black hair and keen grey eyes; broad of shoulder and narrow of hip; a clean-limbed fighting man....