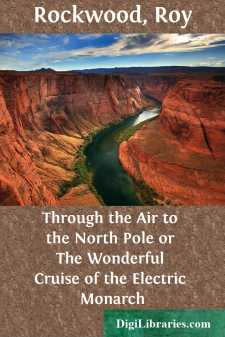 CHAPTER I DRIVEN FROM TOWN

"Come now, you boys git out of here! No tramps allowed in Freeport while Ezra Jenkins is constable! Move along, now, or I'll arrest ye! Here's my badge of authority!" And a crabbed old man, wearing a faded blue suit, with a big shining star of metal on his coat, tapped the emblem with his club.

Two boys, who had just joined each other, after having called at houses on the main street of the little New York village, where Constable Jenkins held sway as the entire police force, started at the sound of the harsh voice.

"Come; are ye goin' to move?" snapped the constable.

"I suppose we'll have to," answered the larger and stouter of the two lads, "but we haven't done anything."

"Ye're tramps, ain't ye?" inquired the constable. "Course ye are! Been beggin', ain't ye? Course ye have! I kin see the victuals stickin' out of yer pockets now! Move on an' git out of Freeport! We don't want any tramps here!"

"Come on, Mark," said the heavier of the two boys; "if our room is better than our company, they can have the room. I hope you'll get richer boarders than we are," the youth went on, turning to the constable. "We are going to shake the dust of Freeport from our feet. I think they ought to call this town Closedport instead of Freeport!"

"None of yer sass, now!" warned the constable, tapping his badge again."Jest you move on out of town!"

"I think we had better go," murmured the other boy, who was thin and small. "Don't make any trouble, Jack."

"All right," assented the other. "Ta-ta, Mr. Chief of Police! See you later!"

"Here, you young rascals!" cried the constable. "Come back here an' I'll lock ye up!"

But the boys started to run, and, as Mr. Jenkins was no longer young, and as his legs were rather stiff, he went only a little way before he had to stop. He shook his fist after the two lads.

"Do you suppose he would have locked us up?" asked the small boy, whom his companion addressed as Mark. His full name was Mark Sampson, but he was very unlike his strong ancestor who pulled over the pillars of the temple.

"He acted mean enough to do anything," replied Jack Darrow, who was quite a contrast in point of size and fleshiness to his companion.

"What shall we do now?" asked Mark.

"Keep on moving, I guess," was the reply, "At least until we get outside of Freeport."

"Well, I'm glad I've got company now. It was lonesome before I met you."

The two boys had met under rather strange circumstances. Early that morning Jack Darrow, the stout one, had awakened from his sleep in a pile of hay in a farmer's field. Close to him was another youth, whose name he had inquired as soon as the owner of it awoke.

Then the two boys discovered that their conditions in life were very similar. Both were orphans, about the same age, Jack being sixteen and Mark fifteen years, and neither had a place he could call home.

"My folks have been dead for some years," said Jack, in telling his story to his companion. "I was hired out to a farmer in the upper part of New York, but he worked me so hard and treated me so mean that I ran away....