Through Siberia and Manchuria By Rail 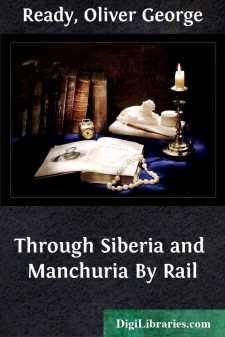 I left Charing Cross on the 15th October, 1903, by the 10 a.m. boat-train for Dover. As we glided on I mentally said good-bye to familiar scenes, for I was outward bound, to put in another five years’ service under the dragon flag.

At Dover we went aboard the Belgian rapide “Ville de Douvres” and in ten minutes were streaming at twenty miles an hour through the shipping on our way across Channel.

It was a lovely day with fair wind and smooth sea, and had only the vessel’s bows been pointed in the opposite direction, I should have been perfectly happy, but they were not, so I had to make the best of things, which consisted in watching over the stern Old England’s chalk cliffs, gleaming white in the brilliant sunshine, slowly sink and disappear into the heaving main. . . . . . . Good-bye. Eastward ho!

The Belgian coast was sighted at about 3 p.m., and shortly after 4 we landed at Ostende, and I was soon installed in a first-class coupé of the weekly Nord-Express, which was to carry me without change as far as Warsaw.

This train de luxe, consisting of an engine and five or six cars, was as replete with comfort and luxury as it was possible to compress within so limited a space.

That night we passed through Belgium by way of Brussels, and at 7.30 next morning, the 16th October, arrived at Berlin, but only stopped for half-an-hour, when we were again en route.

The day was fine and the country pretty, without being beautiful. In places it was well wooded with firs and silver birches. For many miles I noticed sorrel growing alongside the line almost as thickly as grass.

Shortly before arriving at the Russian frontier that afternoon, I saw many truck-loads of parsnips, and heard a train-load of geese, which were coming from the “merry green fields of Poland” to make pâté de foie gras for the Germans.

The frontier town of Alexandrowo was reached at 3 o’clock, and there we passed from German to Russian control. At the German end of the long platform officials and porters were wearing the German uniform. At the Russian end of the platform, all porters were clad in long, white cotton smocks with leather girdles, while officials wore the uniform of the Czar. As the two nationalities were here contrasted, I think the Russians showed to greater advantage, being generally taller and having a more natural bearing than the over-drilled Teuton.

Our luggage was examined by the Customs officers, and our passports taken away, viséd, and returned, before the train was allowed to proceed.

It was getting dark as we steamed into Russia, so that not much of the country could be seen, but as far as I could make out, it looked flat and gloomy enough.

We reached Warsaw at about 8 o’clock, and as the train stopped here, it being a terminus, I drove to the Hotel Bristol.

The general impression I had received while on this rapid journey across half of Europe in little more than 24 hours, was that in Belgium things looked slip-shod, in Germany organized, and in Russia potential....