Through Forest and Stream The Quest of the Quetzal 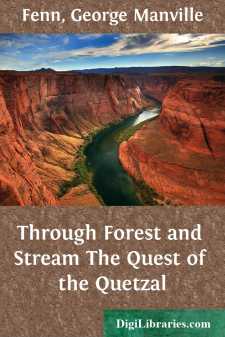 Why we were there.

The captain of the steamer stopped by where I was watching the flying fish fizz out of the blue-ink-like water, skim along for some distance, and drop in again, often, I believe, to be snapped up by some bigger fish; and he gave me a poke in the shoulder with one finger, so hard, that it hurt.

“Yes?” I said, for he stood looking hard in my face, while I looked back harder in his, for it seemed such a peculiar way of addressing one, and his manner was more curious still.

He was naturally a smooth-faced man with a very browny-yellow skin, and he kept on passing the finger with which he had poked me over first one cheek and then over the other, just as if he were shaving himself without soap.

Then his speech seemed more peculiar than his manner, for he repeated my one word, only instead of pronouncing it yes, he turned it into yuss.

He looked so comic and puzzled that I smiled, and the smile became a laugh.

I was sorry directly after, because it seemed rude to one who had been very civil to me ever since we left Kingston Harbour.

“’Tain’t nothing to laugh at, young feller,” he said, frowning. “I’ve been talking to him yonder, and I can’t make nothing of him. He’s a re-lay-tive of yours, isn’t he?”

“Well, I’m afraid he don’t know what he’s cut out for himself, and I think I ought to tell you, so as you may talk to him and bring him to his senses.”

“Oh, yes, there is, my lad. He don’t know what he’s got before him, and it’s right that you should. He’s going shooting, isn’t he?”

“Well, he don’t know what the parts are like where he’s going. Do you know what fevers is?”

“Well, the coast yonder’s where they’re made, my lad. Natur’s got a big workshop all along there, and she makes yaller ones, and black ones; scarlet, too, I dessay, though I never see none there that colour.”

“But he’s going, he tells me, to shoot birds in the forests and up the rivers, and means to skin ’em, and he won’t do it.”

“Why not? Because if the fevers don’t stop you both, the Injuns will; and if they don’t, you’ll get your boat capsized in the rivers or along the coast, or you’ll get lost in the woods and never be heerd of again.”

“Uncle’s an old, experienced traveller,” I said, “and has been a great deal in South America.”

“You warn’t with him there, was you?”

“Then you tell him to stop about the West Indy Islands. He may get some birds there, but he won’t if he goes to the coast yonder. You tell him I say so.”

“Oh, yes, and he thinks he’s going to do wonders with that cranky cockboat.”

He turned and nodded his head contemptuously at our good-sized boat lashed on the deck amidships....