Through Forest and Fire Wild-Woods Series No. 1 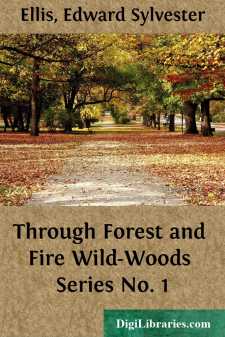 Nicholas Ribsam was a comical fellow from his earliest babyhood, and had an original way of doing almost everything he undertook.

When he became big enough to sit on the porch of the humble little home, where he was born, and stare with his great round eyes at the world as it went by, that world, whether on horseback, in carriage, or on foot, was sure to smile at the funny-looking baby.

Nick, although born in western Pennsylvania, was as thoroughly Dutch as if he had first opened his eyes on the banks of the Zuyder Zee, in the lowlands of Holland. His parents had come from that part of the world which has produced so many fine scholars and done so much for science and literature. They talked the language of the Fatherland, although they occasionally ventured on very broken English for the instruction of the boy and girl which heaven had given them.

When Nick was a year old, he seemed as broad as he was long, and his round, red cheeks, big, honest eyes, and scanty hair, which stood out in every direction, always brought a smile to whomsoever looked at him.

"That's the Dutchest baby I ever saw!" exclaimed a young man, who, as he threw back his head and laughed, expressed the opinion of about every one that stopped to admire the youngster.

When we add that Nick was remarkably good natured, his popularity will be understood. Days and weeks passed without so much as a whimper being heard from him. If his mother forgot she was the owner of such a prize, and allowed him to remain on the porch until he was chilled through or half famished, she was pretty sure to find him smiling, when she suddenly awakened to her duties respecting the little fellow.

Several times he tipped over and rolled off the porch, bumping his head against the stones. A hoarse cry instantly made known the calamity but by the time he was snatched up (often head downward) his face was illumined again by his enormous grin, even though the big teardrops stood on his cheeks.

When he grew so as to be able to stand with the help of something which he could grasp, a board about a foot and a half high was placed across the lower part of the open door to prevent him getting outside.

The first day fat little Nick was confronted with this obstruction he fell over it, out upon the porch. How he managed to do such a wonderful thing puzzled father and mother, who half believed some person or animal must have "boosted" him over; but, as there was no other person in sight and they did not own a dog, the explanation was not satisfactory.

True, they had a big Maltese cat, but he was hardly strong enough, even if he had the disposition, to hoist a plump baby over such a gate, out of pure mischief.

But the most remarkable thing took place the next week, when Nick not only fell out of the door and over the obstruction, but a few minutes later fell in again. In fact, it looked as if from that time forward Nick Ribsam's position was inverted almost as often as it was upright.

"There's one thing I want my little boy to learn," said the father, as he took him on his knee and talked in the language of his Fatherland "and that is, 'God helps them that help themselves.' Don't ever forget it!"

"Yaw, I ish not forgots him," replied the youngster, staring in the broad face of his parent, and essaying to make use of the little English he had picked up.

The good father and mother acted on this principle from the beginning. When Nick lost his balance he was left to help himself up again; when he went bumping all the way down the front steps, halting a moment on each one, his father complacently smoked his long pipe and waited to see how the boy was going to get back, while the mother did not think it worth while to leave her household duties to look at the misfortunes of the lad....