Through Five Republics on Horseback, Being an Account of Many Wanderings in South America 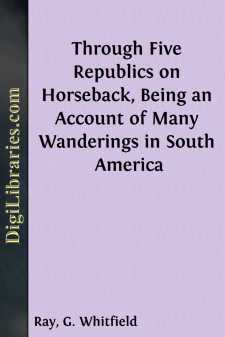 "Through Five Republics on Horseback" has all the elements of a great missionary book. It is written by an author who is an eye-witness of practically all that he records, and one who by his explorations and travels has won for himself the title of the "Livingstone of South America." The scenes depicted by the writer and the glimpses into the social, political and religious conditions prevailing in the Republics in the great Southern continent are of thrilling interest to all lovers of mankind. We doubt if there is another book in print that within the compass of three hundred pages begins to give as much valuable information as is contained in Mr. Ray's volume. The writer wields a facile pen, and every page glows with the passion of a man on fire with zeal for the evangelization of the great "Neglected Continent." We are sure that no one can read this book and be indifferent to the claims of South America upon the Christian Church of this generation.

To those who desire to learn just what the fruits of Romanism as a system are, when left to itself and uninfluenced by Protestantism, this book will prove a real eye-opener. We doubt if any Christian man, after reading "Through Five Republics on Horseback," will any longer conclude that Romanism is good enough for Romanists and that Missions to Roman Catholic countries are an impertinence. We trust the book will awaken a great interest in the evangelization of the Latin Republics of South America.

Of course, this volume will have interest for others besides missionary enthusiasts. Apart from the religious and missionary purpose of the book, it contains very much in the way of geographical, historical and scientific information, and that, too, in regard to a field of which as yet comparatively little is known. The writer has kept an open mind in his extensive travels, and his record abounds in facts of great scientific value.

We have known Mr. Ray for several years and delight to bear testimony to his ability and faithfulness as a preacher and pastor. As a lecturer on his experiences in South America he is unexcelled. We commend "Through Five Republics on Horseback" especially to parents who are anxious to put into the hands of their children inspiring and character-forming reading. A copy of the book ought to be in every Sunday School Library.

A PRELIMINARY WORD ON SOUTH AMERICA

The Continent of South America was discovered by Spanish navigators towards the end of the fifteenth century. When the tidings of a new world beyond the seas reached Europe, Spanish and Portuguese expeditions vied with each other in exploring its coasts and sailing up its mighty rivers.

In 1494 the Pope decided that these new lands, which were nearly twice the size of Europe, should become the possession of the monarchs of Spain and Portugal. Thus by right of conquest and gift South America with its seven and a half million miles of territory and its millions of Indian inhabitants was divided between Spain and Portugal....