Through Finland in Carts 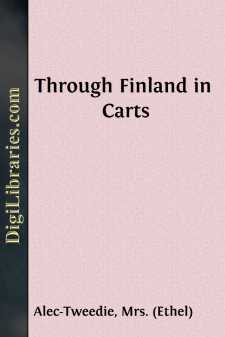 It is worth the journey to Finland to enjoy a bath; then and not till then does one know what it is to be really clean.

Finland is famous for its baths and its beauties; its sky effects and its waterways; its quaint customs and its poetry; its people and their pluck. Finland will repay a visit.

Foreign travel fills the mind even if it empties the pocket. Amusement is absolutely essential for a healthy mind.

Finland, or, as the natives call it in Finnish, Suomi, is a country of lakes and islands. It is a vast continent about which strangers until lately hardly knew anything, beyond such rude facts as are learnt at school, viz., that "Finland is surrounded by the Gulfs of Finland and Bothnia on the South and West, and bordered by Russia and Lapland on the East and North," and yet Finland is larger than our own England, Scotland, Ireland, aye, and the Netherlands, all put together.

When we first thought of going to Suomi, we naturally tried to procure a Finnish guide-book and map; but no guide-book was to be obtained in all London, except one small pamphlet about a dozen pages long; while at our best-known map shop the only thing we could find was an enormous cardboard chart costing thirty shillings. No one ever dreamed of going to Finland. Nevertheless, Finland is not the home of barbarians, as some folk then imagined; neither do Polar bears walk continually about the streets, nor reindeer pull sledges in summer—items that have several times been suggested to the writer.

Nothing daunted by want of information, however, we packed up our traps and started.

We were three women, my sister, Frau von Lilly—a born Finlander—and the writer of the following pages. That was the beginning of the party, but it increased in numbers as we went along—a young man here, a young girl there, an old man, or an old woman, joined us at different times, and, alas, left us again.

Having made charming friends in that far-away land, and picked their brains for information as diligently as the epicure does the back of a grouse for succulent morsels, we finally—my sister and I—jogged home again alone.

This looks bad in print! The reader will say, "Oh, how disagreeable they must have been, those two, that every one should have deserted them!" but this would be a mistake, for we flatter ourselves that we really are rather nice, and only "adverse circumstances" deprived us of our friends one by one.

Love and Friendship are the finest assets in the Bank of Life.

Grave trouble had fallen at my door. Life had been a happy bounteous chain; the links had snapped suddenly and unexpectedly, and solace and substance could only be found in work.

'Tis often harder to live than to die.

Immediate and constant work lay before me. The cuckoo's note trilled forth in England, that sad, sad note that seemed to haunt me and speed me on life's way. No sooner had I landed in Suomi than the cuckoos came to greet me. The same sad tone had followed me across the ocean to remind me hourly of all the trouble I had gone through. The cuckoo would not let me rest or forget; he sang a song of sympathy and encouragement.

It was on a brilliant sunny morning early in June that the trim little ship Urania steamed between the many islands round the coast to enter, after four and a half days' passage from Hull, the port of Helsingfors. How many thousands of posts, growing apparently out of the sea, are to be met with round the shores of Finland! Millions, we might say; for not only the coast line, which is some eight hundred miles in length, but all the lakes and fjords through which steamers pass are marked out most carefully by wooden stakes, or near the large towns by stony banks and painted signs upon the rocks of the islands. Sometimes the channels are so dangerous that the little steamers have to proceed at half-speed, carefully threading their way in and out of the posts, as a drag at Hurlingham winds its course between barrels at the four-in-hand competitions.

Many places, we learnt, are highly dangerous to attempt at night, on account of these stakes, which are put down by Government boats in the spring after the ice has gone, and are taken up in November before it forms again, because for about seven months all sea traffic is impossible....