Through Central Borneo; an Account of Two Years' Travel in the Land of Head-Hunters Between the Years 1913 and 1917 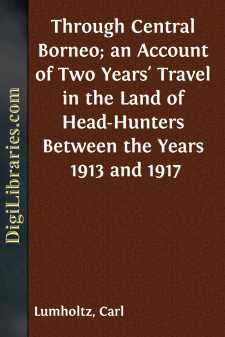 Ever since my camping life with the aborigines of Queensland, many years ago, it has been my desire to explore New Guinea, the promised land of all who are fond of nature and ambitious to discover fresh secrets. In furtherance of this purpose their Majesties, the King and Queen of Norway, the Norwegian Geographical Society, the Royal Geographical Society of London, and Koninklijk Nederlandsch Aardrijkskundig Genootschap, generously assisted me with grants, thus facilitating my efforts to raise the necessary funds. Subscriptions were received in Norway, also from American and English friends, and after purchasing the principal part of my outfit in London, I departed for New York in the autumn of 1913, en route for the Dutch Indies. In 1914, having first paid a visit to the Bulungan, in northeast Borneo, in order to engage the necessary Dayaks, I was preparing to start for Dutch New Guinea when the war broke out.

Under these changed conditions his Excellency, the Governor-General, A.W.F. Idenburg, regretted his inability to give me a military escort and other assistance needed for carrying out my plan, and advised me to await a more favorable opportunity. During this interval, having meanwhile visited India, I decided to make an expedition through Central Borneo, large tracts of which are unexplored and unknown to the outside world. My project was later extended to include other regions of Dutch Borneo, and the greater part of two years was spent in making researches among its very interesting natives. In these undertakings I received the valuable assistance of their Excellencies, the governor-general and the commanding general, as well as the higher officials of the Dutch Government, to all of whom I wish to express my heartfelt thanks.

Through the courtesy of the well-known Topografische Inrichting, in Batavia, a competent surveyor, whose work will later be published, was attached to my expeditions. He did not accompany me on my first visit to the Bulungan, nor on the second occasion, when I went to the lake of Sembulo, where the country is well known. In the map included in this book I have indicated the locations of the different tribes in Dutch Borneo, based on information gathered from official and private sources and on my own observations.

I usually had a taxidermist, first a trained Sarawak Dayak, later a Javanese, to collect mammals and birds. Fishes and reptiles were also preserved in alcohol.

Specimens of ethnological interest were collected from the different tribes visited; the collection from the Penihings I believe is complete. Measurements of 227 individuals were taken and as soon as practicable will be worked out by Doctor K.S. Schreiner, professor at the University of Christiania. Vocabularies were collected from most of the tribes. In spite of adverse conditions, due to climate and the limitations under which I travelled, a satisfactory collection of photographic plates and films was brought back. With few exceptions, these photographs were taken by myself....