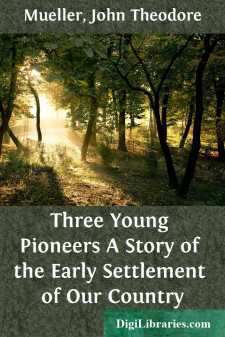 "Come to me, children," said Mrs. Bradley invitingly; "I will be a mother to you, my darlings. You shall not be a burden to the community, but I will take care of you myself."

Having said this, she seized the little boy and his sister and pressed them to her heart, while tears trickled down her full, rosy cheeks.

"Now you little sweethearts," she said soothingly, "you must not be afraid of me. Let me wipe your tears, and then you will come with me to my quarters, and I will give you something very, very good to eat. But by all means don't cry anymore."

The children snuggled up to her and she took them by their hands, away from the crowd which had frightened them by their curious stares. There was a sigh of relief when the woman had promised to take care of them, for all on shipboard were glad that the two orphans had found a protector.

"God bless thee, Sister Clara," said the minister; "the Lord will reward thee, after thy goodness, both here and hereafter. Nor will He ever forsake or leave thee with the extra burden imposed on thee."

"The children are no burden," the woman replied; "but rather a godsend, for both my husband and I have longed for two little angels like these long ago. How they will comfort our hearts in those weary hours of winter when the days are so short and the nights so long! And, please you, sir, there will be enough for us to eat, for the good Lord has blessed us abundantly. But I must not delay to attend to them; so kindly excuse me, I must go."

The minister looked after her with grateful eyes, and then turned to the men and women standing around him.

"A pious woman she is," he said; "a rich reward will be hers for her great kindness."

Then the congregation dispersed, each family departing for the cabins and quarters where they lodged during the long, long voyage over the Atlantic.

Traveling at that time was not as comfortable as it is now, for the conversation that we just related took place just three hundred years ago, to be exact in the year of our Lord 1630.

Since that time many and great changes have taken place in the world, and should the people of that time rise from their graves, they would be amazed at the transformation that has taken place.

At that time the voyage across the ocean was slow and dangerous; the ships were small and propelled by the wind, so that when the weather was contrary, it took the emigrants a long time to reach America. Usually the food was poor, and quite often the water gave out, so that the people on shipboard suffered extremely. At the time of our story there were many who wished to settle in America, and in consequence the vessels were usually crowded to the utmost of their capacity. The result was that sickness spread among the passengers, and many did not reach the country where they hoped to find liberty of conscience.

Among these was the mother of the two children, of whom we just spoke. The boy's name was Fred, and he was eight years old; the name of his sister was Agnes, and she was seven....