Three Years on the Plains Observations of Indians, 1867-1870

by Edmund B. Tuttle 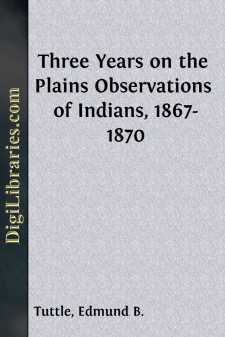 The interest which boys are taking in all that relates to our Indian tribes, and the greediness they manifest in devouring the sensational stories published so cheaply, filling their imaginations with stories of wild Indian life on the plains and borders, without regard to their truthfulness, cannot but be harmful; and therefore the writer, after three years' experience on the plains, feels desirous of giving youthful minds a right direction, in a true history of the red men of our forests. Thus can they teach their children, in time to come, what kind of races have peopled this continent; especially before civilization had marked them for destruction, and their hunting-grounds for our possession.

The rights and wrongs of the Indians should be told fairly, in order that justice may be done to such as have befriended the white men who have met the Indians in pioneer life, and been befriended often by the savage, since the Mayflower landed her pilgrims on these shores some two hundred and fifty years ago.

The writer proposes now only a history of Indians since he began to know the "Six Nations" in Western New York, about forty years ago. Since then, these have dwindled down to a handful, and do not now exist in their separate tribal relations, but mixed in with others, far away from the beautiful lakes they once inhabited.

WHERE DID THE INDIANS COME FROM?

The origin of the native American Indian has puzzled the wisest heads.

The most plausible theory seems to be that they are one of the lost tribes of Israel; that they crossed a narrow frith from the confines of Asia, and that their traditions, it is said, go far to prove it.

For instance, the Sioux tell us that they were, many moons ago, set upon by a race larger in number than they, and were driven from the north in great fear, till they came to the banks of the North Platte, and finding the river swollen up to its banks, they were stopped there, with all their women, children, and horses. The enemy was pursuing, and their hearts grew white with fear. They made an offering to the Great Spirit, and he blew a wind into the water, so as to open a path on the bed of the river, and they all went over in safety, and the waters, closing up, left their enemies on the other side. This, probably, is derived from a tradition of their forefathers, coming down to them from the passing of the children of Israel through the Red Sea.

Elias Boudinot, many years ago, and a minister in Vermont also, published books to show that the American Indians were a portion of the lost tribes, from resemblances between their religious customs and those of the Israelites. Later still, a converted Jew named Simon, undertook to identify the ancient South American races, Mexicans, Peruvians, etc., as descendants of ancient Israel, from similarity of language and of civil and religious customs. These authors have taken as their starting-point the resolution which, Esdras informs us (in the Apocrypha), the ten tribes took after being first placed in the cities of the Medes, viz., that they would leave the multitude of the heathen and go into a land wherein never mankind dwelt, that they might there keep their laws, which God gave them; and they suppose that, in pursuance of this resolution, the tribes continued in a northeasterly direction until they came to Behring Straits, which they crossed, and set foot on this continent, spreading over it from north to south, until, at the discovery of it by Columbus, they had peopled every part....