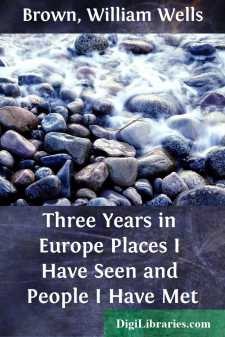 A narrative of the life of the author of the present work has been most extensively circulated in England and America. The present memoir will, therefore, simply comprise a brief sketch of the most interesting portion of Mr. Brown's history while in America, together with a short account of his subsequent cisatlantic career. The publication of his adventures as a slave, and as a fugitive from slavery in his native land, has been most valuable in sustaining a sound anti-slavery spirit in Great Britain. His honourable reception in Europe may be equally serviceable in America, as another added to the many practical protests previously entered from this side of the Atlantic, against the absolute bondage of three millions and a quarter of the human race, and the semi-slavery involved in the social and political proscription of 600,000 free coloured people in that country.

William Wells Brown was born at Lexington, in the state of Kentucky, as nearly as he can tell in the autumn of 1814. In the Southern States of America, the pedigree and age of a horse or a dog are carefully preserved, but no record is kept of the birth of a slave. All that Mr. Brown knows upon the subject is traditionally, that he was born "about corn-cutting time" of that year. His mother was a slave named Elizabeth, the property of Dr. Young, a physician. His father was George Higgins, a relative of his master.

The name given to our author at his birth, was "William"—no second or surname being permitted to a slave. While William was an infant, Dr. Young removed to Missouri, where, in addition to his profession as a physician, he carried on the—to European notions—incongruous avocations of miller, merchant, and farmer. Here William was employed as a house servant, while his mother was engaged as a field hand. One of his first bitter experiences of the cruelties of slavery, was his witnessing the infliction of ten lashes upon the bare back of his mother, for being a few minutes behind her time at the field—a punishment inflicted with one of those peculiar whips in the construction of which, so as to produce the greatest amount of torture, those whom Lord Carlisle has designated "the chivalry of the South" find scope for their ingenuity.

Dr. Young subsequently removed to a farm near St. Louis, in the same State. Having been elected a Member of the Legislature, he devolved the management of his farm upon an overseer, having, what to his unhappy victims must have been the ironical name of "Friend Haskall." The mother and child were now separated. The boy was levied to a Virginian named Freeland, who bore the military title of Major, and carried on the plebeian business of a publican. This man was of an extremely brutal disposition, and treated his slaves with most refined cruelty. His favourite punishment, which he facetiously called "Virginian play," was to flog his slaves severely, and then expose their lacerated flesh to the smoke of tobacco stems, causing the most exquisite agony....