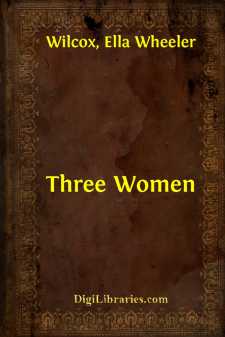 My love is young, so young;Young is her cheek, and her throat,And life is a song to be sungWith love the word for each note.

Young is her cheek and her throat;Her eyes have the smile o' May.And love is the word for each noteIn the song of my life to-day.

Her eyes have the smile o' May;Her heart is the heart of a dove,And the song of my life to-dayIs love, beautiful love.

Her heart is the heart of a dove,Ah, would it but fly to my breastWhere lone, beautiful love,Has made it a downy nest.

Ah, would she but fly to my breast,My love who is young, so young;I have made her a downy nestAnd life is a song to be sung.

A dull little station, a man with the eyeOf a dreamer; a bevy of girls moving by;A swift moving train and a hot Summer sun,The curtain goes up, and our play is begun.The drama of passion, of sorrow, of strife,Which always is billed for the theatre Life.It runs on forever, from year unto year,With scarcely a change when new actors appear.It is old as the world is—far older in truth,For the world is a crude little planet of youth.And back in the eras before it was formed,The passions of hearts through the Universe stormed.

Maurice Somerville passed the cluster of girlsWho twisted their ribbons and fluttered their curlsIn vain to attract him; his mind it was plainWas wholly intent on the incoming train.That great one eyed monster puffed out its black breath,Shrieked, snorted and hissed, like a thing bent on death,Paused scarcely a moment, and then sped away,And two actors more now enliven our play.

A graceful young woman with eyes like the morn,With hair like the tassels which hang from the corn,And a face that might serve as a model for Peace,Moved lightly along, smiled and bowed to Maurice,Then was lost in the circle of friends waiting near.A discord of shrill nasal tones smote the ear,As they greeted their comrade and bore her from sight.(The ear oft is pained while the eye feels delightIn the presence of women throughout our fair land:God gave them the graces which win and command,But the devil, who always in mischief rejoices,Slipped into their teachers and ruined their voices.)

There had stepped from the train just behind Mabel LeeA man whose deportment bespoke him to beA child of good fortune. His mien and his airWere those of one all unaccustomed to care.His brow was not vexed with the gold seeker's worry,His manner was free from the national hurry.Repose marked his movements. Yet gaze in his eye,And you saw that this calm outer man was a lie;And you knew that deep down in the depths of his breastThere dwelt the unmerciful imp of unrest.

He held out his hand; it was clasped with a willIn both the firm palms of Maurice Somerville."Well, Reese, my old Comrade;" "Ha, Roger, my boy,"They cried in a breath, and their eyes gemmed with joy(Which but for their sex had been set in a tear),As they walked arm in arm to the trap waiting near,And drove down the shining shell roadway which woundThrough forest and meadow, in search of the Sound....