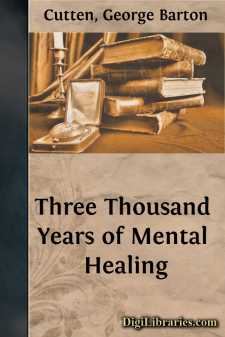 "Oh, if I could once make a resolution, and determine to be well!"—Walderstein.

"The body and the mind are like a jerkin and a jerkin's lining, rumple the one and you rumple the other."—Sterne.

"I find, by experience, that the mind and the body are more than married, for they are most intimately united; and when the one suffers, the other sympathizes."—Chesterfield.

"Sublime is the dominion of the mind over the body, that for a time can make flesh and nerve impregnable, and string the sinews like steel, so that the weak become so mighty."—Stowe.

"The surest road to health, say what they will, Is never to suppose we shall be ill; Most of those evils we poor mortals know From doctors and imagination flow."—Churchill.

The fact that there is a reciprocal relation between mental states and bodily conditions, acting both for good and ill, is nothing new in human experience. Even among the most crude and unobserving, traditions and incidents have given witness to this knowledge. For centuries stories of the hair turning white during the night on account of fright or sorrow, the cause and cure of diseases through emotional disturbances, and death, usually directly by apoplexy, caused by anger, grief, or joy, have been current and generally accepted. On the other hand, irritability and moroseness caused by disordered organs of digestion, change of acumen or morals due to injury of the brain or nervous system, and insanity produced by bodily diseases, are also accepted proofs of the effect of the body on the mind.

Recent scientific investigation has been directed along the line of the influence of the mind over the body, and to that phase of this influence which deals with the cure rather than the cause of disease. In addition to what the scientists have done along this line, various religious cults have added the application of these principles to their other tenets and activities, or else have made this the chief corner-stone of a new structure. There are some reasons why this connection with religion should continue to exist, and why it has been a great help both to the building up of these particular sects and the healing of the bodies of those who combine religion with mental healing.

We must not forget that in early days the priest, the magician, and the physician were combined in one person, and that primitive religious notions are difficult to slough off. Shortly before the beginning of the Christian era there were some indications that healing was to be freed from the bondage of religion, but the influence of Jesus' healing upon Christians, and the overwhelming influence of Christianity upon the whole world, delayed this movement, so that it did not again become prominent until the sixteenth century. About this time, when therapeutics as a science began to shake off the shackles of religion and superstition, another startling innovation was noticeable, viz., the division of mental healing into religious and non-religious healing....