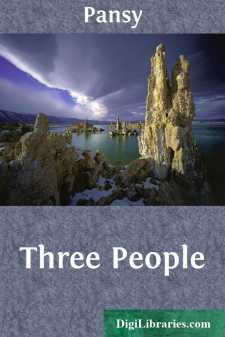 CHAPTER I. SOME BABIES.   IE the sash a very little looser, nurse, and give the loops a more graceful fall; there—so. Now he's a beauty! every inch of him." And Mrs. Hastings moved backward a few steps in order to get the full effect.

A beauty he was, certainly; others beside his mother would have admitted that. What baby fresh from a bath, and robed in the daintiest and most perfect of baby toilets, with tightly curling rings of brown hair covering the handsome head; with great sparkling, dancing blue eyes, and laughing rosebud mouth; with hands and feet and body strung on invisible wires, and quivering with life and glee, was ever other than a beauty?

The whole house was in commotion in honor of the fact that Master Pliny L. Hastings, only son and heir of the great Pliny Hastings, Senior, of Hastings' Hall, had "laughed and cried, and nodded and winked," through the entire space of three hundred and sixty-five days and nights, and actually reached the first anniversary of his birthday.

A remarkable boy was Pliny Hastings. He didn't know yet that his father was a millionaire, but he must have surmised it, for, as far back as he could remember, his bits of sleeves had been looped with real pearls; rosewood and lace and silk and down had united to make his tiny bed; he had bitten his first tooth through on a sphere of solid gold—and all the wonderful and improbable contrivances for royal babyhood that could be bought or imagined, met together in that grand house on the Avenue for this treasured bit of humanity.

On this particular day baby was out in all his glory; he had made the circuit of the great parlors, stopping on his way to be tossed toward the ceiling, in the arms of first one uncle and then another. He had been kissed and cuddled by all the aunties and cousins, until his cheeks were rosy with triumph; and, finally, he had been carried, shouting with glee, high up on his father's shoulder, down to the dining-room, and occupied the seat of honor at the long table, where he crowed, and laughed, and clapped his hands over every plum that found its way into his dainty mouth. This conduct was interspersed, however, by sundry dives and screams after the coffee urn and the ice pitcher, and various unattainable things—for there were unattainable things, even for Pliny Hastings. Oh, the times and times in his young life that he had cried for the beautiful round moon, and got it not! And even gaslight and firelight had hitherto eluded his eager grasp; but he had learned no lessons from his failures, and still pitched and dived after impossibilities in the most insane fashion. To-day he looked with indifference on the gold-lined silver cup bearing his name and age, and wanted the great carving fork instead. He cared not a whit that the sparkling wine was poured, and glasses were touched, and toasts drank on his account; but a touch of wisdom must have come over his baby brain, for he made a sudden dash at his father's glass, sending the red wine right and left, and shivering the frail glass to fragments; he did more than that, he promptly seized on one of the sharpest bits, and thereby cut a long crooked gash in the sweet chubby finger, and was finally borne, shrieking and struggling, from the room, his little heart filled with mingled feelings of terror and rage....