Three French Moralists and The Gallantry of France 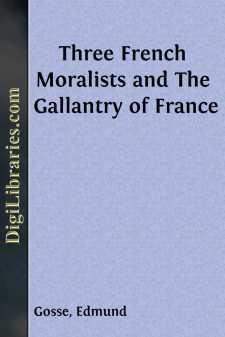 The object of these essays is to trace back to its source, or to some of its sources—for the soul of France is far too complex to be measured by one system—the spirit of gallantry which inspired the young French officers at the beginning of the war. We cannot examine too minutely, or with too reverent an enthusiasm, the effort of our great ally, and in this theme for our admiration there are many strains, some of which present themselves in apparent opposition to one another. The war has now lasted so long, and has so completely altered its character, that what was true of the temper of the soldiers of France in November 1914 is no longer true in April 1918. Confidence and determination are still there, there is no diminution in domestic intensity or in patriotic fervour, but the long continuance of the struggle has modified the temper of the French officer, and it will probably never be again what it was in the stress and tempest of sacrifice three years and a half ago, when the young French soldiers, flushed with the idealisms which they had imbibed at St. Cyr, rushed to battle like paladins, "with a pure heart," in the rapture of chivalry and duty.

All that has long been wearied out, and might even be forgotten, if the letters and journals of a great cloud of witnesses were not fortunately extant. The record kept by the friends of Paul Lintier and those others whom I am presently to mention, and by innumerable persons to whose memory justice cannot here be done, will keep fresh in the history of France the idealism of a splendid generation. Now we see, and for a long time past have seen, a different attitude on the fields of Champagne and Picardy. There is no feather worn now in the cap, no white gloves grasp the sword; the Saint Cyrian elegance is over and done with. There is no longer any declamation, any emphasis, any attaching of importance to "form" or rhetoric. The fervour and the emotion are there still, but they are kept in reserve, they are below the surface, "at the bottom of the heart," as La Rochefoucauld puts it.

Heroism is now restrained by a sense of the prodigious length and breadth of the contest, by the fact, at last patent to the most unthinking, that the war is an octopus which has wound its tentacles about every limb and every organ of the vitality of France. A revelation of the overwhelming violence of enormous masses of men has broken down the tradition of chivalry. War is now accepted with a sort of indifference, as a part of the day's work; "pas de grands mots, pas de grands gestes, pas de drame!" The imperturbable French officer of 1918 attaches no particular importance to his individual gesture. He concentrates his energy in another kind of action.

But the French race is by nature bellicose and amorous of adventure, and more than all other nations has a tendency to clothe its patrimonial ardour of defence in beautiful terms and gallant attitudes. This is one of the points on which the British race, with its scrupulous reserve, often almost its affectation of self-depreciating shyness, differs most widely from the French, and is most in need of sympathetic imagination in dealing with a noble ally whose methods are not necessarily the same as ours....