Three Expeditions into the Interior of Eastern Australia, Volume 2 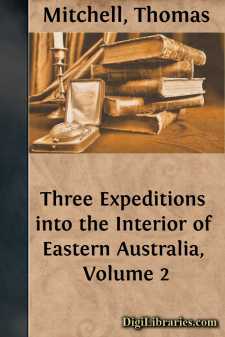 Towards the end of the year 1835 I was apprised that the governor of New South Wales was desirous of having the survey of the Darling completed with the least possible delay. His excellency proposed that I should return for this purpose to the extreme point on the Darling where my last journey terminated and that, after having traced the Darling into the Murray, I should embark on the latter river and, passing the carts and oxen to the left bank at the first convenient opportunity, proceed upwards by water as far as practicable and regain the colony somewhere about Yass Plains.

The preparations for this journey were made, as on the former occasion, chiefly in the lumber-yard at Parramatta, and under the superintendence of the same officer, Mr. Simpson. Much of the equipment used for the last expedition was available for this occasion. The boats and boat-carriage were as serviceable as ever, with the advantage of being better seasoned; and we could now, having had so much experience, prepare with less difficulty for such an undertaking.

In consequence of a long-continued drought serviceable horses and bullocks were at that time scarce, and could only be obtained at high prices; but no expense was spared by the government in providing the animals required.

The party having preceded me by some weeks on the road, I at length overtook it on the 15th of March in a valley near the Canobolas which I had fixed as the place of rendezvous, and where, from the great elevation, I hoped still to find some grass. How we were to proceed however without water was the question I was frequently asked; and I was informed at Bathurst that even the Lachlan was dried up.

On the following day I organised the party, and armed the men. I distributed to each a suit of new clothing; consisting of grey trousers and a red woollen shirt, the latter article, when crossed by white braces, giving the men somewhat of a military appearance.

Their names and designation were as follows:

LIST OF THE PARTY PROCEEDING TO THE DARLING IN MARCH 1836.*

(*Footnote. The men whose names are printed in uppercase had obtained their freedom as a reward for past services in the interior. The asterisks distinguish the names of men who had been with me on one or both the former expeditions. Those to whose names the letter T is also prefixed having previously obtained a ticket of leave releasing them from a state of servitude. Each man was also furnished with a small case containing six cartridges which he was ordered always to wear about his waist.)