Three Expeditions into the Interior of Eastern Australia, Volume 1 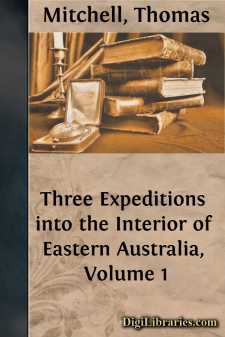 PREFACE TO THE FIRST EDITION.

The following Journals were written at the close of many a laborious day, when the energies both of mind and body were almost exhausted by long-continued toil. The author trusts that this circumstance will account for, and palliate, some of the defects which may be discovered in his volumes. Conscious as he is of the deficiencies of his work, he nevertheless hopes that the reader will not pronounce it to be wholly devoid of interest. Though Australia calls up no historical recollections, no classical associations of ideas, it has other, and not less valid titles to our attention. It is a new and vast country, over the largest portion of which a veil of mystery still hangs; many of its productions vary in a singular manner, from those in other parts of the world; within the memory of man one British colony has risen there, in spite of adverse circumstances, to a high degree of prosperity; others have been founded, which promise to be equally successful; and it seems impossible to doubt that, at no distant period, the whole territory will be inhabited by a powerful people, speaking the English language, diffusing around them English civilisation and arts, and exercising a predominant influence over eastern Asia, and the numerous and extensive islands in that quarter of the globe.

In his expeditions into the interior of Australia, the author was led cheerfully on, by an eager curiosity to examine a country which is yet in the same state as when it was formed by its Maker. With respect to the narrative of those expeditions, the sole merit which he claims is that of having faithfully described what he attentively observed; neither his pencil nor his pen has been allowed to pass the bounds of truth. There is however one branch of his subject on which justice and gratitude render it necessary for him to say something more. In those departments of natural history, to which he owns himself a stranger, he has received assistance of the utmost value from several distinguished persons. To the few plants which, after his unfortunate fellow traveller had sacrificed his life to the pursuit, the writer was able to collect, a permanent place in the botanic system has been given by Dr. Lindley. Much importance has been added to the work, by the researches and discoveries which Professor Owen has made, with regard to the fossil remains; and the few particulars gleaned relative to existing animals have enabled Mr. Ogilby to introduce several interesting novelties to the attention of zoologists. To these gentlemen, and also to Professor Faraday, Mr. MacLeay, and other scientific friends, the warmest acknowledgments of the writer are due, for whatever naturalists may deem worthy of praise in these pages.

The aid thus liberally afforded, acting in unison with a feeling that, as the surveys were undertaken by order of Government, it is his duty to lay the result of them early before the public, has encouraged the author to persevere steadily in bringing out these volumes; though he must candidly own that, but for these considerations, he would rather have delayed the performance of this task till he had completed another,* of a national character, which, connected as it is with the days of his early service in the cause of his country, may naturally be supposed to have stronger and more attractive claims upon him....