Three Dialogues Between Hylas and Philonous 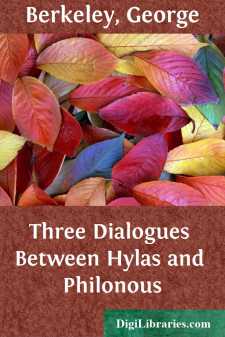 PHILONOUS. Good morrow, Hylas: I did not expect to find you abroad so early.

HYLAS. It is indeed something unusual; but my thoughts were so taken up with a subject I was discoursing of last night, that finding I could not sleep, I resolved to rise and take a turn in the garden.

PHIL. It happened well, to let you see what innocent and agreeable pleasures you lose every morning. Can there be a pleasanter time of the day, or a more delightful season of the year? That purple sky, those wild but sweet notes of birds, the fragrant bloom upon the trees and flowers, the gentle influence of the rising sun, these and a thousand nameless beauties of nature inspire the soul with secret transports; its faculties too being at this time fresh and lively, are fit for those meditations, which the solitude of a garden and tranquillity of the morning naturally dispose us to. But I am afraid I interrupt your thoughts: for you seemed very intent on something.

HYL. It is true, I was, and shall be obliged to you if you will permit me to go on in the same vein; not that I would by any means deprive myself of your company, for my thoughts always flow more easily in conversation with a friend, than when I am alone: but my request is, that you would suffer me to impart my reflexions to you.

PHIL. With all my heart, it is what I should have requested myself if you had not prevented me.

HYL. I was considering the odd fate of those men who have in all ages, through an affectation of being distinguished from the vulgar, or some unaccountable turn of thought, pretended either to believe nothing at all, or to believe the most extravagant things in the world. This however might be borne, if their paradoxes and scepticism did not draw after them some consequences of general disadvantage to mankind. But the mischief lieth here; that when men of less leisure see them who are supposed to have spent their whole time in the pursuits of knowledge professing an entire ignorance of all things, or advancing such notions as are repugnant to plain and commonly received principles, they will be tempted to entertain suspicions concerning the most important truths, which they had hitherto held sacred and unquestionable.

PHIL. I entirely agree with you, as to the ill tendency of the affected doubts of some philosophers, and fantastical conceits of others. I am even so far gone of late in this way of thinking, that I have quitted several of the sublime notions I had got in their schools for vulgar opinions. And I give it you on my word; since this revolt from metaphysical notions to the plain dictates of nature and common sense, I find my understanding strangely enlightened, so that I can now easily comprehend a great many things which before were all mystery and riddle.

HYL. I am glad to find there was nothing in the accounts I heard of you.

PHIL. Pray, what were those?

HYL. You were represented, in last night's conversation, as one who maintained the most extravagant opinion that ever entered into the mind of man, to wit, that there is no such thing as MATERIAL SUBSTANCE in the world....