Three Contributions to the Theory of Sex

by A. A. (Abraham Arden) Brill 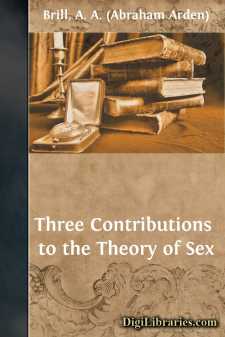 I THE SEXUAL ABERRATIONS

The fact of sexual need in man and animal is expressed in biology by the assumption of a "sexual impulse." This impulse is made analogous to the impulse of taking nourishment, and to hunger. The sexual expression corresponding to hunger not being found colloquilly, science uses the expression "libido."

Popular conception makes definite assumptions concerning the nature and qualities of this sexual impulse. It is supposed to be absent during childhood and to commence about the time of and in connection with the maturing process of puberty; it is supposed that it manifests itself in irresistible attractions exerted by one sex upon the other, and that its aim is sexual union or at least such actions as would lead to union.

But we have every reason to see in these assumptions a very untrustworthy picture of reality. On closer examination they are found to abound in errors, inaccuracies and hasty conclusions.

1. DEVIATION IN REFERENCE TO THE SEXUAL OBJECT

The popular theory of the sexual impulse corresponds closely to the poetic fable of dividing the person into two halves—man and woman—who strive to become reunited through love. It is therefore very surprising to hear that there are men for whom the sexual object is not woman but man, and that there are women for whom it is not man but woman. Such persons are called contrary sexuals, or better, inverts; the condition, that of inversion. The number of such individuals is considerable though difficult of accurate determination.

The Behavior of Inverts.—The above-mentioned persons behave in many ways quite differently.

(a) They are absolutely inverted; i.e., their sexual object must be always of the same sex, while the opposite sex can never be to them an object of sexual longing, but leaves them indifferent or may even evoke sexual repugnance. As men they are unable, on account of this repugnance, to perform the normal sexual act or miss all pleasure in its performance.

(b) They are amphigenously inverted (psychosexually hermaphroditic); i.e., their sexual object may belong indifferently to either the same or to the other sex. The inversion lacks the character of exclusiveness.

(c) They are occasionally inverted; i.e., under certain external conditions, chief among which are the inaccessibility of the normal sexual object and initiation, they are able to take as the sexual object a person of the same sex and thus find sexual gratification.

The inverted also manifest a manifold behavior in their judgment about the peculiarities of their sexual impulse. Some take the inversion as a matter of course, just as the normal person does regarding his libido, firmly demanding the same rights as the normal....