Three Boys or the Chiefs of the Clan Mackhai 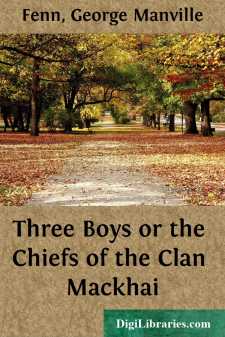 The Mackhai of Dun Roe.

“Look here, Scoodrach, if you call me she again, I’ll kick you!”

“I didna ca’ you she. I only said if she’d come ten the hoose aifter she had the parritch—”

The sound of a back-handed slap in the chest, followed by a kick, both delivered by Kenneth Mackhai, the recipient being a red-headed, freckled-faced lad of seventeen, who retaliated by making a sharp snatch at the kicking foot, which he caught and held one half moment. The result was startling.

Kenneth Mackhai, the sun-browned, well-knit, handsome son of “the Chief,” came down in a sitting position on the stones, and screwed up his face with pain.

“Ken, are you coming to breakfast?” cried a loud, severe voice from fifty yards away.

“Coming, father!” shouted the lad, leaping up, giving himself a shake to rearrange his dark green kilt, and holding up his fist threateningly at the bare-legged, grinning lad before him. “Just you wait till after breakfast, Master Scood, and I’ll make you squint.”

The lad ran up the steep slope to the garden surrounding the ancient castle of Dunroe, which had been built as a stronghold somewhere about the fourteenth century, and still stood solid on its rocky foundation; a square, keep-like edifice, with a round tower at each corner, mouldering, with portions of the battlements broken away, but a fine monument still of the way in which builders worked in the olden time.

The portion Kenneth Mackhai approached had for inhabitants only the jackdaws, which encumbered the broken stairs by the loopholes with their nests; but, after passing beneath a gloomy archway and crossing the open interior, he left the old keep by another archway, to enter the precincts of the modern castle of Dunroe, a commodious building, erected after the style of the old, and possessing the advantages of a roof and floors, with large windows looking across the dazzling sea.

Kenneth entered a handsome dining-room, where the breakfast was spread, and where his father, The Mackhai, a tall, handsome man of fifty, was pacing angrily up and down.

“Sorry I kept you, father. Scood said there was a seal on the lower rocks, and—”

“The scoundrel! How dare he?” muttered The Mackhai. “To take such a mean advantage of his position. I will not suffer it. I’ll—”

“I’m very sorry, father!” faltered Kenneth, crossing slowly toward his frowning elder. “I did not mean to—”

“Eh! what, Ken, my boy?” cried The Mackhai, with his countenance changing. “I’ve only just come in. Sit down, my lad. You must be half-starved, eh?”

“I thought you were cross with me, sir.”

“Tchah! nonsense! Thinking aloud. What did you say?—a seal?”

“Yes, father. Scood said there was one, but it had gone.”

“Then you didn’t shoot it? Well, I’m not sorry. They’re getting scarce now, and I like to see the old things about the old place....