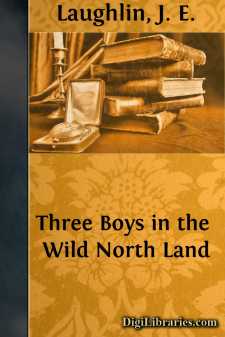 “Welcome to this Wild North Land! welcome to our happy home in the Land of the North Wind! Welcome, thrice welcome, all and each one of you!”

Thus excitedly and rapidly did Mr Ross address a trio of sunburnt, happy boys, who, with all the assurance of a joyous welcome, had burst in upon him in his comfortable, well-built home, or “hunting lodge,” as he preferred to call it, on the banks of the Nelson River. This cozy but isolated home was situated some hundreds of miles up in the interior of the country from York Factory, on the Hudson Bay.

Mr Ross had named his house “Sa-gas-ta-wee-kee,” a beautiful Indian word which literally means a house full of sunshine. Mr Ross had spent many years as an official in the Hudson Bay Company’s service, as had his father before him. A few years before this, being possessed of abundance of means, he had retired from active work in the great fur-trading company. He had tried to settle down in an older, civilised land, but had found it impossible to content himself away from those regions where he had spent the best years of his life. His wife and family were of the same mind, and so, after some years of travel in various lands, they returned to this northern country where they had spent so many happy years.

Every year or so Mr Ross with some members of his family was in the habit of visiting what he loved to call the mother country. So full was his life of varied and startling adventures that he was often asked to give addresses on some of the fascinating experiences through which he had passed.

Among the crowds who listened to him with intense interest, as he gave a series of addresses in one of the great historic schools in the home land, were the three boys who are to be the heroes of this book. Although they were from different families and nationalities, yet they were congenial spirits, and were equally filled with the love of sport and spirit of exciting adventure.

For such boys Mr Ross’s addresses about the Indians, the wild animals, and the excitements of the hunt had the greatest fascination. With Mr Ross they had become personally acquainted, and had induced him to visit their different towns, where he lectured, and to be the guest at their homes, where his delightful stories had charmed every member of their households.

In some way or other they had persuaded their parents to consent to their spending a year or so in the wilds of the northern part of the great Dominion of Canada under the guidance of Mr Ross, who most importunately pleaded for this arrangement on behalf of the boys. As it was impossible for them to return with Mr Ross on account of their studies, several months passed away ere it was possible for them to begin their journey; so he had returned alone to his home, and had made all preparations for entertaining them as members of his household for an indefinite period.

Letters had been sent on in advance notifying Mr Ross of the probable time of the arrival of the boys. But, as often happened in that wild country, where there was no postal service, the letters never arrived, and so the first intimation Mr Ross had of the coming of the boys was their bursting in upon him....