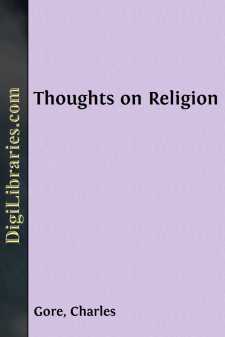 Few subjects have excited so much interest of late years as that which I thus mark out for discussion. This can scarcely be considered a matter of surprise, seeing that the influence in question is not only very direct, but also extremely important from every point of view. For generations and for centuries in succession Religion maintained an undisputed sway over men's minds—if not always as a practical guide in matters of conduct, at least as a regulator of belief. Even among the comparatively few who in previous centuries professedly rejected Christianity, there can be no doubt that their intellectual conceptions were largely determined by it: for Christianity being then the only court of appeal with reference to all these conceptions, even the few minds which were professedly without its jurisdiction could scarcely escape its indirect influence through the minds of others. But as side by side with the venerable institution a new court of appeal was gradually formed, we cannot wonder that it should have come to be regarded in the light of a rival to the old—more especially as the searching methods of its inquiry and the certain character of its judgements were much more in consonance with the requirements of an age disposed to scepticism. And this spirit of rivalry is still further fostered by the fact that Science has unquestionably exerted upon Religion what Mr. Fiske terms a 'purifying influence.' That is to say, not only are the scientific methods of inquiry after truth more congenial to sceptical minds than are the religious methods (which may broadly be defined as accepting truth on authority), but the results of the former have more than once directly contradicted those of the latter: science has in several cases incontestably demonstrated that religious teaching has been wrong as to matters of fact. Further still, the great advance of natural knowledge which has characterized the present century, has caused our ideas upon many subjects connected with philosophy to undergo a complete metamorphosis. A well-educated man of the present day is absolutely precluded from regarding some of the Christian dogmas from the same intellectual standpoint as his forefathers, even though he may still continue to accept them in some other sense. In short, our whole key of thinking or tone of thought having been in certain respects changed, we can no longer anticipate that in these respects it should continue to harmonize with the unalterable system of theology.

Such I conceive to be the ways in which Science has exerted her influence upon Religion, and it is needless to dwell upon the potency of their united effect. No one can read even a newspaper without perceiving how great this effect has been. On the one hand, sceptics are triumphantly confident that the light of dawning knowledge has begun finally to dispel the darkness of superstition, while religious persons, on the other hand, tremble to think what the future, if judged by the past, is likely to bring forth....