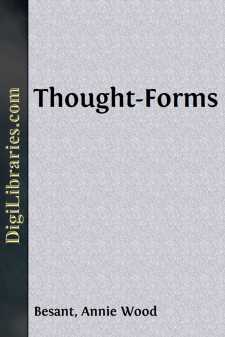 As knowledge increases, the attitude of science towards the things of the invisible world is undergoing considerable modification. Its attention is no longer directed solely to the earth with all its variety of objects, or to the physical worlds around it; but it finds itself compelled to glance further afield, and to construct hypotheses as to the nature of the matter and force which lie in the regions beyond the ken of its instruments. Ether is now comfortably settled in the scientific kingdom, becoming almost more than a hypothesis. Mesmerism, under its new name of hypnotism, is no longer an outcast. Reichenbach's experiments are still looked at askance, but are not wholly condemned. Röntgen's rays have rearranged some of the older ideas of matter, while radium has revolutionised them, and is leading science beyond the borderland of ether into the astral world. The boundaries between animate and inanimate matter are broken down. Magnets are found to be possessed of almost uncanny powers, transferring certain forms of disease in a way not yet satisfactorily explained. Telepathy, clairvoyance, movement without contact, though not yet admitted to the scientific table, are approaching the Cinderella-stage. The fact is that science has pressed its researches so far, has used such rare ingenuity in its questionings of nature, has shown such tireless patience in its investigations, that it is receiving the reward of those who seek, and forces and beings of the next higher plane of nature are beginning to show themselves on the outer edge of the physical field. "Nature makes no leaps," and as the physicist nears the confines of his kingdom he finds himself bewildered by touches and gleams from another realm which interpenetrates his own. He finds himself compelled to speculate on invisible presences, if only to find a rational explanation for undoubted physical phenomena, and insensibly he slips over the boundary, and is, although he does not yet realise it, contacting the astral plane.

One of the most interesting of the highroads from the physical to the astral is that of the study of thought. The Western scientist, commencing in the anatomy and physiology of the brain, endeavours to make these the basis for "a sound psychology." He passes then into the region of dreams, illusions, hallucinations; and as soon as he endeavours to elaborate an experimental science which shall classify and arrange these, he inevitably plunges into the astral plane. Dr Baraduc of Paris has nearly crossed the barrier, and is well on the way towards photographing astro-mental images, to obtaining pictures of what from the materialistic standpoint would be the results of vibrations in the grey matter of the brain.

It has long been known to those who have given attention to the question that impressions were produced by the reflection of the ultra-violet rays from objects not visible by the rays of the ordinary spectrum. Clairvoyants were occasionally justified by the appearance on sensitive photographic plates of figures seen and described by them as present with the sitter, though invisible to physical sight. It is not possible for an unbiassed judgment to reject in toto the evidence of such occurrences proffered by men of integrity on the strength of their own experiments, oftentimes repeated. And now we have investigators who turn their attention to the obtaining of images of subtle forms, inventing methods specially designed with the view of reproducing them. Among these, Dr Baraduc seems to have been the most successful, and he has published a volume dealing with his investigations and containing reproductions of the photographs he has obtained. Dr Baraduc states that he is investigating the subtle forces by which the soul—defined as the intelligence working between the body and the spirit—expresses itself, by seeking to record its movements by means of a needle, its "luminous" but invisible vibrations by impressions on sensitive plates. He shuts out by non-conductors electricity and heat. We can pass over his experiments in Biometry (measurement of life by movements), and glance at those in Iconography—the impressions of invisible waves, regarded by him as of the nature of light, in which the soul draws its own image. A number of these photographs represent etheric and magnetic results of physical phenomena, and these again we may pass over as not bearing on our special subject, interesting as they are in themselves. Dr Baraduc obtained various impressions by strongly thinking of an object, the effect produced by the thought-form appearing on a sensitive plate; thus he tried to project a portrait of a lady (then dead) whom he had known, and produced an impression due to his thought of a drawing he had made of her on her deathbed. He quite rightly says that the creation of an object is the passing out of an image from the mind and its subsequent materialisation, and he seeks the chemical effect caused on silver salts by this thought-created picture....