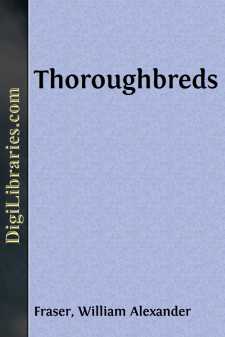 Less than a hundred miles from the city of Gotham, across broad green fields, dotted into squares and oblong valleys by full-leafed maple, and elm, and mulberry, was the village of Brookfield. A hundred years of expansion in the surrounding land had acted inversely with the little hamlet, and had pinched it into a hermitical isolation.

By an inconsistent twist of fate he was known as Honest John. His father before him had raced in old Kentucky to considerable purpose, and with the full vigor of a man who races for sport; and so to the son John, in consequence, had come little beyond a not-to-be-eradicated love of thoroughbreds. To race squarely, honestly, and to the glory of high-couraged horses was to him as much a matter of religion as the consistent guardianship of parish morals was to the Reverend George Dolman. Therefore, two men of strong beliefs were set on opposite sides of the fence.

Even in the Porter household, which was at Ringwood Farm, was divided allegiance. Mrs. Porter was possessed of an abhorrent detestation of horse racing; also an assertive Christianity. The daughter, Allison, had inherited the horse taint. The swinging gallop of a striving horse was to her the obliteration of everything but sunshine, and the smile of fields, and the blur of swift-gliding hedges, and the driving perfume of clover-laden winds that passed strong into spread nostrils. For Alan Porter, the son, there were columns of figures and musty-smelling bundles of tattered paper money where he clerked in the bank. There had been great unison in the Porter household over the placing of Alan. In addition to horse lore, John Porter was a fair judge of human nature, and, beyond doubt, there was a streak of velvet in Alan which would have twisted easily in the compressive grip of the race course.

The Porter family were not the only dwellers of Brookfield who took part in racing. Philip Crane, the banker, wandering from the respectable highway of finance, had allowed himself to become interested in race horses. But this fact was all but unknown in Brookfield, so the full resentment of the place was effusively tendered to John Porter.

In his younger days some money had come to Philip Crane. The gambler spirit, that was his of inheritance, had an instinctive truth as allied to finance; but, unfortunately for Philip Crane, chance and a speculative restlessness led him amongst men who commenced with the sport of kings. With acute precipitancy he was separated from the currency that had come to him. The process was so rapid that his racing experience was of little avail as an asset, so he committed the first great wise act of his life-turned his back upon the race course and marched into finance, so strongly, so persistently, that at forty he was wealthy and the banker of Brookfield....