Thomas Hart Benton's Remarks to the Senate on the Expunging Resolution 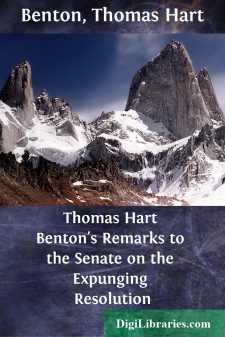 It is now three years since the resolve was adopted by the Senate, which it is my present motion to expunge from the journal. At the moment that this resolve was adopted, I gave notice of my intention to move to expunge it; and then expressed my confident belief that the motion would eventually prevail. That expression of confidence was not an ebullition of vanity, or a presumptuous calculation, intended to accelerate the event it affected to foretell. It was not a vain boast, or an idle assumption, but was the result of a deep conviction of the injustice done President Jackson, and a thorough reliance upon the justice of the American people. I felt that the President had been wronged; and my heart told me that this wrong would be redressed! The event proves that I was not mistaken. The question of expunging this resolution has been carried to the people, and their decision has been had upon it. They decide in favor of the expurgation; and their decision has been both made and manifested, and communicated to us in a great variety of ways. A great number of States have expressly instructed their Senators to vote for this expurgation. A very great majority of the States have elected Senators and Representatives to Congress, upon the express ground of favoring this expurgation. The Bank of the United States, which took the initiative in the accusation against the President, and furnished the material, and worked the machinery which was used against him, and which was then so powerful on this floor, has become more and more odious to the public mind, and musters now but a slender phalanx of friends in the two Houses of Congress. The late Presidential election furnishes additional evidence of public sentiment. The candidate who was the friend of President Jackson, the supporter of his administration, and the avowed advocate for the expurgation, has received a large majority of the suffrages of the whole Union, and that after an express declaration of his sentiments on this precise point. The evidence of the public will, exhibited in all these forms, is too manifest to be mistaken, too explicit to require illustration, and too imperative to be disregarded. Omitting details and specific enumeration of proofs, I refer to our own files for the instructions to expunge—to the complexion of the two Houses for the temper of the people—to the denationalized condition of the Bank of the United States for the fate of the imperious accuser—and to the issue of the Presidential election for the answer of the Union.

All these are pregnant proofs of the public will, and the last pre-eminently so: because, both the question of the expurgation, and the form of the process, were directly put in issue upon it….

Assuming, then, that we have ascertained the will of the people on this great question, the inquiry presents itself, how far the expression of that will ought to be conclusive of our action here. I hold that it ought to be binding and obligatory upon us; and that, not only upon the principles of representative government, which require obedience to the known will of the people, but also in conformity to the principles upon which the proceeding against President Jackson was conducted when the sentence against him was adopted....